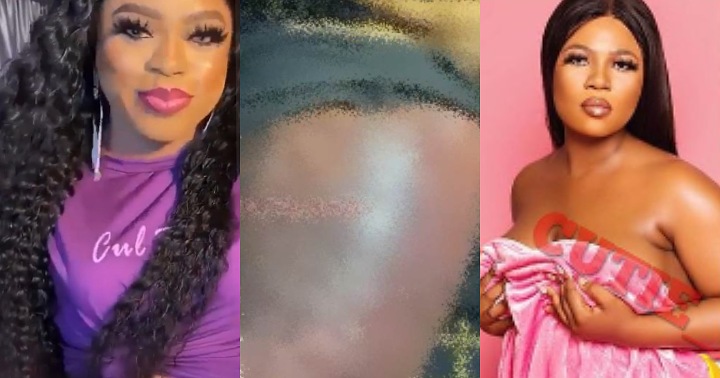 Recent reports have alleged that Bobrisky is currently in a court case with a lady identified as Eboss over leaked photos of his butt.

According to Cutiejulz, Eboss is the lady who took Bobrisky for butt surgery and Bobrisky sent photos to her after he noticed that the surgery was having a bad effect on his body.

However, moments later, he found the photos circulating on blogs and he sued the lady to court, accusing her of leaking his private photos.

“So according to our police source, Eboss and Bobrisky has an ongoing battle. Eboss is Bobrisky’s friend who took him to do yansh.

From what we were told by our olopa sources, going by the statement of both parties; After Bob was discharged, he started reacting badly to the surgery procedure. So he started panicking and called Eboss who was the one that is very close to the surgeon.

He told Eboss what was happening to his body then Eboss asked him to send her images of the supposed reactions so she could forward it to the doctor.

Long story short, the images found themselves on the internet according to the official statements. Then in Eboss’ statement, she pleaded guilty and said she also did send the images to kayamata seller, Omoshola.

According to the police, the medical team has admitted realised what they did wrong and corrected their mistake and Bob was fine. Apparently they initially injected too much fat on the hip area and they need the needful to correct that and made sure Bob was fully recovered

Eboss said she didn’t know Omoshola had an ulterior motive when she asked for those images 🤔 Hmmm the question is, how did Omoshola know that Bob has shared such images with Eboss?

What are the chances that Eboss isn’t the one who shared those images to the internet herself? Well the matter is still in court, we were told by the police. Hmmm Internet friends 😩”

Real cause of Cubana Chiefpriest and Maria’s beef, revealed