I’m scared, her spirit is tormenting me – Girlfriend of suspected killer of slain Benue vendor cries out 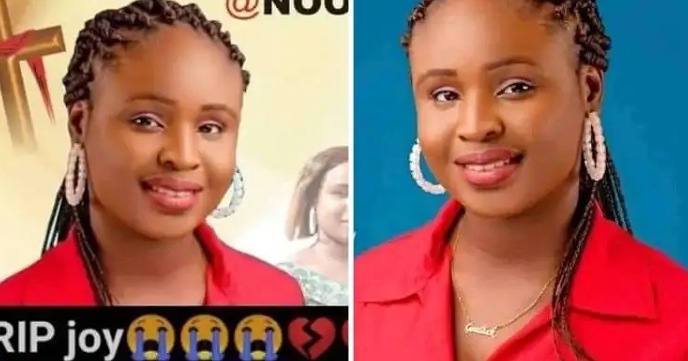 A lady who alleged to be the girlfriend of suspected killer of slain Benue online vendor, Joy Onoh Ogochuckwu, has reacted to the incident.

Joy Onoh Ogochukwu, a 24-year-old graduate of the Department of Mass Communication, Benue State University, Makurdi, was on Tuesday night lured and allegedly raped to death by supposed client who asked her to deliver some clothes.

In a new update, the suspected killer’s girlfriend identified as Martha, cried out to the family of the victim, stating that the ghost of the late Joy has been tormenting her.

She confessed that her boyfriend, Matthew, strangled the late vendor in her room after inviting to deliver some cloths.

In a recorded telephone conversation released by a family member of the late Joy, Martha claimed she wasn’t around when her boyfriend committed the crime.

She claimed she was in the market and when got home, her boyfriend had already killed Joy and gave her Joy’s phone and her bag which had some cash inside with the cloths she came to sell and asked her to run to the village.

“My boyfriend invited her to come and sell cloths in Federal Housing 1st Gate (North Bank Makurdi) so he now strangled her. And collected her bag and her phone and gave me her money that I should travel with it. I should go far. But, I’m scared, the spirit is tormenting me,” Martha lamented.

Two suspects have been arrested in connection to the killing of Joy Onoh Ogochukwu.

If I was living abroad, I would have turned to a dog cause I’m too loose – Bobrisky