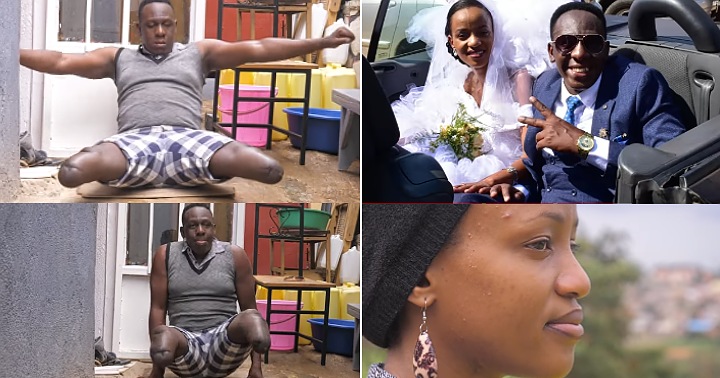 A physically challenged man has narrated how he kept his secret from his wife that he was disabled till the day of their wedding.

According to the story shared by AFRIMAX, Ndayisenga and Deborah have been married for eight months. Ndayisenga revealed that he dated his wife for two years but he never told her that he had no legs.

Physically challenged man shares touching story as he gets…

Mother narrates emotional story of how her children who were…

Ndayisenga lost his legs due to a bomb blast which led to the amputation of his both legs.

He disclosed that many people from his village bullied him over his disabled condition, stating that no woman will ever accept to marry him because he was disabled.

Recounting how he met his wife, he said he is a musician and he met her while he was performing in a competition. They became good friends; a friendship that turned out to be a romantic relationship.

While they were dating, they promised to keep themselves pure till marriage, and he was unable to open up to her that his legs had been amputated due to fear of being rejected, since he had faced rejection through out his childhood.

They planned their wedding, got married and his wife was in shock when she realized that her husband had no legs but that did not stop her from loving him.

Deborah stated that he is the best husband and she will always be on his side. She also stated that she would ensure that he forgets his childhood trauma and the constant bullying he passed through.

On the other hand, Ndayisenga expected his wife to divorce him but that was not the case.

They have been married for eight months and they insist that their union is the best thing that has ever happened in their lives.

BBNaija’s Angel sparks reactions as she announces her engagement