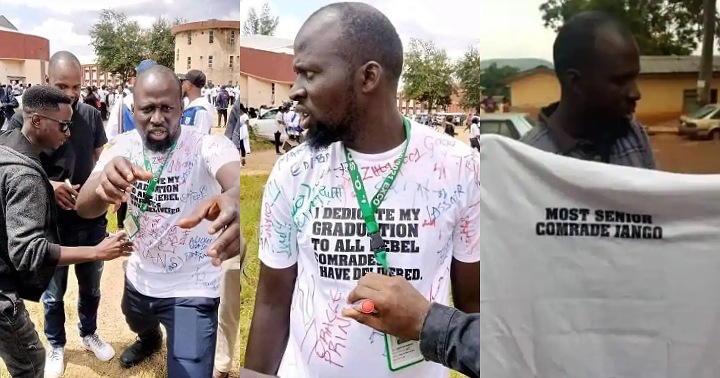 A History Education student identified as Jonathan Ogboffa, has finally graduated from the University of Jos after staying for over a decade in school.

Reports gathered that the student was popularly known as Aluta Jango in the UNIJOS community.

Aluta Jango was treated to a heartwarming celebration across social media platforms as the news of his signing out broke out.

UGC UNIJOS Breaking News on Facebook shared a picture of Jonathan showing off a white shirt that had the inscription: “Most Senior Comrade Jango.”

Reports gathered that Jonathan was deep into student politics and NANS, and this made him move from one department to the other over the years till his eventual graduation.

Reacting to his signing out, TarOrFeeek wrote:
“The biggest congratulations to the Lecturers who successfully held him back for 13 years. At least now they themselves can find something better to do with life. Nigeria is a poorly told joke.”

Arome Alvin Adejo stated:
“Congrats most senior comrade…we appreciate your at least 15 years of service to Unijos…we wish you a happy farewell❤️Leader!!!”

Ikillbrokehoes said:
“Assuming he schooled in a sane clime, he would have graduated since and by now he would have been an accomplished man with high paying job. Schooling in Nigeria is a disease, a big one. “This is why my unborn kids will never school in Nigeria, whether it’s private or FG schools, never! All this money I’m hustling and gathering is for their future, I will make sure I give them the privileges my parents gave me.”

Drkkk1 wrote:
“Comrade Jango stayed that long moving from department to department due largely to his unserious nature and deep involvement in campus and NANS politics. This period is good enough for a serious person to undertake Diploma, B.Sc, NYSC, MBA, M.Sc and Ph.D. I will not be surprised, if he emerged someday as a member of the House of the green chamber.”

Insider claims Janemena hasn’t been in contact with her husband, advises her to beg for forgiveness