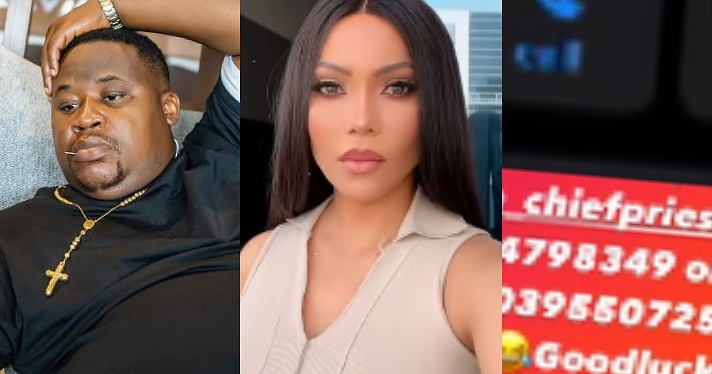 He did this as payback to Cubana Chiefpriest for sharing BBNaija’s Maria‘s number on social media.

Celebrity barman, Cubana Chiefpriest and Maria have been the topic of discussion, after Cubana dragged Maria to filth for threatening his sister after stealing her husband.

“Paid 7 rain makers so I can clean” – Cubana ChiefPriest…

Cubana called out Maria, and accused her of snatching his sister’s husband and still sending her threat messages.

“My Sister Gave Up The Marriage After Finding Out Kelvin Sponsored The Big Brother Movement And Also When She Came To Dubai To See The Husband Who Does Not Pick Calls Again And Low N Behold Maria Opened The Door For Her Putting On The Husbands Tshirt,

I Personally Gave Kelvin Who Managed Maria’s Account While She Was In Big Brother And I Also Intorduced Them To @pauloo2104 For Management, All We Ask Is Let Her Not Receive Threats Again She Has Moved Out Of Their Matrimonial Home In Owerri To Abuja Few Days Ago To Get A New Life, Let Her Be Respected. They Were Never Divorced Since 2018, She Just Started The Process Which He Is Yet To Respond”

However, reacting to the drama, Paul Okoye took offence at Cubana for sharing Maria’s number, and he shared his own number as payback.

“Anybody that comes into your life to bill you is the person that will k!ll you” – Reno Omokri

I’m scared, her spirit is tormenting me – Girlfriend of suspected killer of slain Benue vendor cries out