Real cause of Cubana Chiefpriest and Maria’s beef, revealed 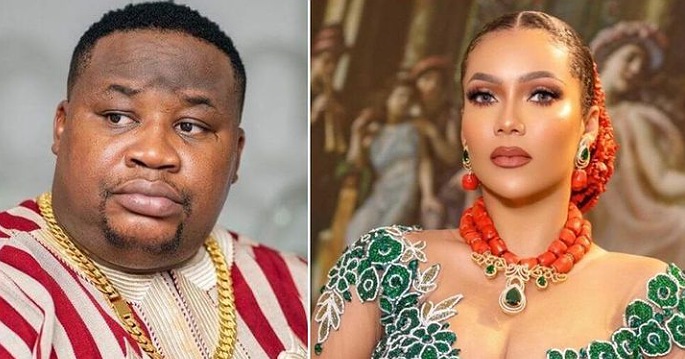 The alleged cause of celebrity barman Cubana Chiefpriest and Maria’s beef on Instagram, has been uncovered.

A blogger identified as Cutiejulz claimed that Cubana called out Maria for his own personal interest, and not for the interest of Melvin’s wife as he claimed.

“Ezenmuo has known about Maria and Kelvin since. Long story short [the fear of Mmazi Mark is the beginning of wisdom] 😩😩

On Saturday, one of Kelivin’s side chics called Kelvin on phone and Maria picked up g the phone and warned the lady not to call Kelvin’s phone ever again.

The lady is one of Ezenmuo’s handwork to Kelvin. So she reported it to Ezenmuo. On a normal day, Ezenmuo does this with most of big men friends. He supplies side chics and they then appreciate him by patronising his pub amongst other financial gains. The ladies also look after Ezenmuo very well of the deal is good.

So long story short, this lady in question reported the issue to Ezenmuo.

Apparently this is not the first time other side chics of Oga Kelvin has reported Maria’s “madam feeling attitude”. So Ezenmuo decided to humble Maria so he contacted Maryann who is Kelvin’s wife. Maryann admitted she’s known about Maria and Kelvin for a long time now and that she and Kelvin have been having issues mainly of his many side chics thing. Maryann then went ahead to inform Ezenmuo that she’s had several encounters with Maria over the phone but has currently gone passed it as she is no longer interested in the marriage and they are even divorcing etc.

Ezenmuo later the next day called out Maria as a tool to embarrass her etc not for Maryann but for her audacity to warn other side chics to stay off etc. But he had to play it like he was looking out for Maryann [Kelvin’s wife] so that society will support his actions.

Ezenmuo was doing that for his own interest [piim-piiing, financial gains etc] and not the interest of Maryann. Of course Kelvin has not been a “good hubby” and neither Maria is right to be side chicing but Ezenmuo has also been Kelvin’s pimp all these while.”