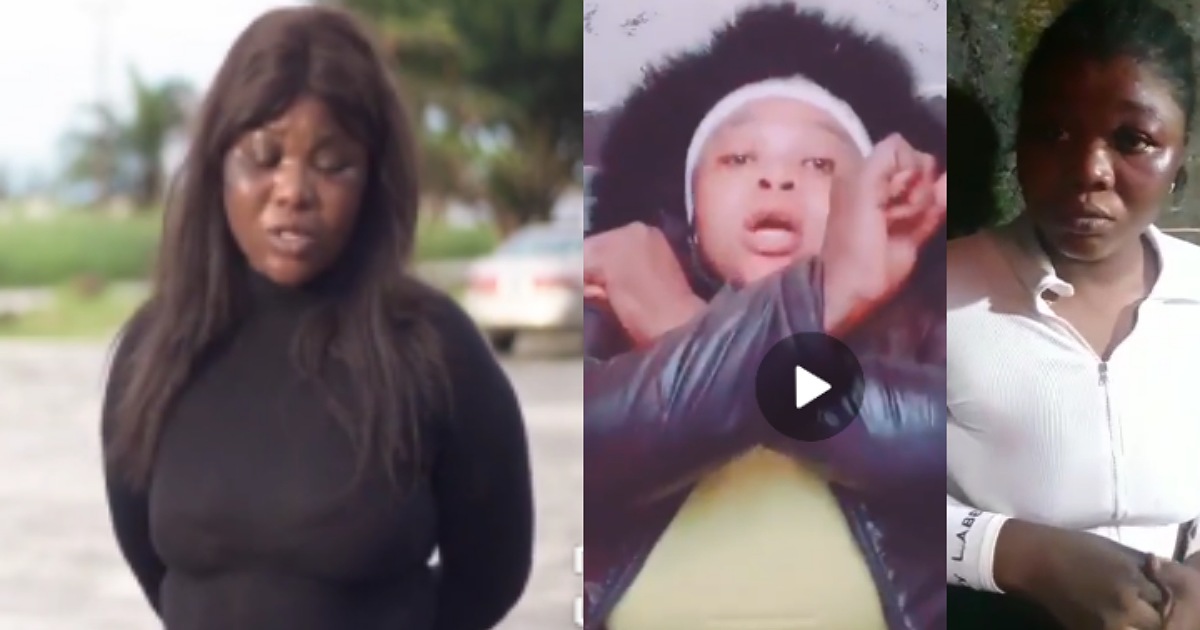 Perry, the famous Tiktok girl that was allegedly beaten by cultists, has narrated her sordid experience in the hands of cult boys suspected to be members of Aiye confraternity in Benin, Edo State.

We recall that news of Perry being abducted by cultists and brutalised by the rogue elements broke the internet few days ago as Nigerians from all walks of life sympathised with her.

It was reported that the cult boys descended on her because she made use of a particular cult song of the confraternity to do a video on Tiktok.

Viral TikTok girl to receive N2million for trip to America…

Narrating her ordeal in an interview with Activist Israel Joe, she stated that, “I was beaten and humiliated by some cultist boys in Benin and it happened recently. It was a shock to me actually and it was because they said I did a video and the video was their song. So, they confronted me because I used that song and they said: Why should I use their cultist song to do a video on Tiktok.”

According to her, she found the song on the internet and decided to do video on Tiktok with song based on the fact that it was trending and she wanted to get recognition, adding that she is not a member of any cult group.

“The song was on Tiktok. I saw it on the internet as the song is already recorded there. It was just for me to display on it to gain follower on Tiktok and to become popular, because I also saw people doing it and I was prompted to do mine too. So I didn’t do it because I was a cult member or I belong to any cult group,” she said.

Perry, while recounting the traumatising event, revealed that even though she was stripped naked and treated in the most hideous manner, she escaped death by a whisker after she was whisked away by six cult boys.

She said: “They are 6 boys precisely, if I’m not making any mistake. Those boys that they caught, they’re the boys that tortured me. They picked me from a bar named Polingo in Benin. And they took me to sharp corner first of all. Then from there, I was surrounded by two other boys with the ones that came to call me. I was confused about the whole thing and ask them the reason for calling me here. One of them said I should wait that someone is coming to show me something and that if it’s me, that I should wait and if not me, then I had no problem. And so I waited.

“While waiting, I got tired because of time and I told them I wish to leave. The other guy refused and said I should wait till the other guy that wants to see me comes first since they’ve something to show me on phone. In the process we were talking, another guy approached us and asked me if I was on Tiktok and I said: “Yes, I’m on Tiktok.” After that, the same guy that came to call me asked me: “Do you know a girl named otutu?” I told him I know the girl. And from there, they told me to follow them somewhere that a boy is waiting for me there.

“They forced me to an unknown location as they were with guns. One them even said I must follow them but I said no, because I didn’t know their reason. They insisted and I succumbed and followed them. While going, I told them that I wasn’t comfortable and wanted to return. They refused till they got to the location and they dragged me into an uncompleted building. Inside the building, they said I’m the girl that used their song to do a video on Tiktok. I then begged them but they refused. I was stripped naked and oil and urine were poured on my head.

“After they were done beating me and all that, they saw that I was getting unconscious when they attempted to kill me, as one of them brought out a gun. I pleaded with them that they should take me as their sister and pity me and my family. Literally, I was begging for my life at that point. Then confusion came and one of them said they shouldn’t kill me but the rest disagreed. So, the guy who didn’t want them to kill me left and after that, they started leaving one by one. And that was how my life was spared.”

She, however, noted that she was left traumatised by what the cult boys did to her, hence she cried out for help while seeking justice, stating that she is confused and terrified.

Her words: “Right now, I’m confused at this stage as I don’t know what to do. I’m actually in Benin but I can’t come out. I stay indoors, I don’t do anything and I’m confused.

“I need help because I’m still scared about everything. I don’t want much troubles. I just need help and support. I however need justice because what they did is a horrible and traumatising experience. Although I wasn’t r*ped, they beat me mercilessly and treated me like I wasn’t human.”