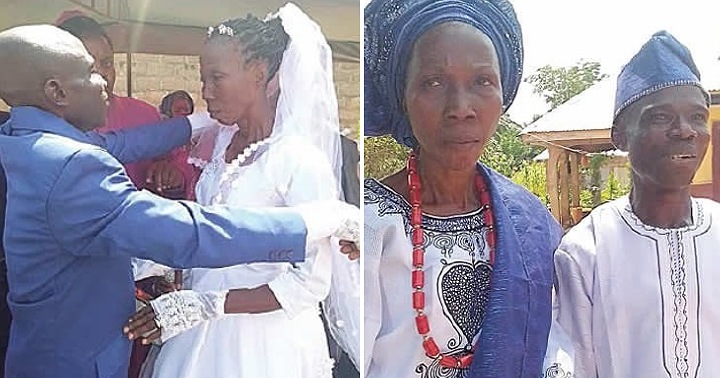 A 55-year-old woman, Esther Bamiloye has tied the knot with her 62-year-old lover, Isaac Bakare in Osun State.

Reports gathered that the 55-year-old woman was still a virgin prior to her wedding, as she patiently waited for the right man to come along.

“Ikenna why are you crying?” – Bride…

According to Esther, God answered her long-time prayer by bringing her a man who took the decision to tie the knot with her, despite all odds.

When asked about her love life, the bride said;

“The devil had plans to stop me from getting married. When I felt I was ready, there was no man coming for me. I kept waiting on God for a miracle till I reached 55-years. I never dated anyone till I got married.

Initially, I thought the problem was from my former church and I left, but I give glory to God. He did it for me in my new church and all the barriers were removed.”

Narrating the story of how she met her husband, Esther stated;

“God had been revealing his picture and personality to me and speaking to me about him through some people for over three years. Exactly on the day it reached three years that I first got the revelation, God sent the message again through a prophet.

The description of his looks, where he would come from and others matched perfectly when I set my eyes on him at Ilesa. My church is in Osogbo, but we had an event in Ilesa where I met the man destined for me.

God even revealed our wedding date, which was October 29, 2021. The period between our meeting and wedding was really short. I give God all the glory for remembering me after all these years.”