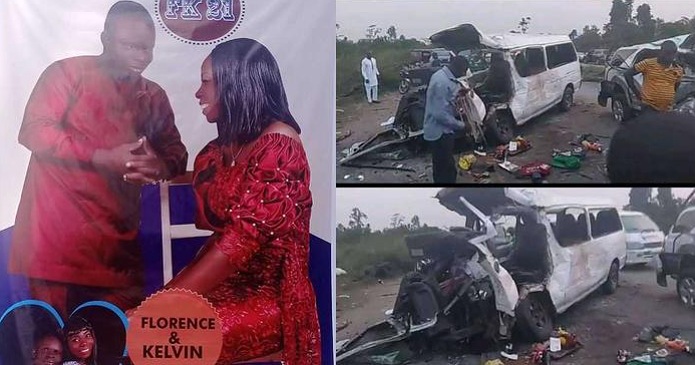 A Nigerian man who recently wedded has been thrown into mourning after losing his parents, siblings, uncle and other relatives in a fatal accident.

Reports gathered that the unfortunate accident occurred at the tollgate along Glory Land drive in Igbogene axis of Yenagoa, the capital city of Bayelsa on December 4.

The deceased family members were returning to their home in Ebedebiri in Sagbama Local Government Area of the state after the wedding ceremony of Keme Kelvin and Florence when the ugly incident occurred and claimed numerous lives.

Eye witnesses explained that the bus that conveyed the deceased individuals collided with another vehicle coming from Warri.

The vehicles were reportedly trying to divert to the East-West road when the unfortunate incident happened.

Confirming the incident, the spokesperson of the police in the state, SP Asinim Butswat, said:

“The unfortunate accident occurred on Saturday 4th December, 2021 at about 1700hours, along the Glory Land drive, Igbogene, involving a Toyota Hiace Bus with Reg No. AKL 652 YP and a Toyota Forerunner SUV with Reg No. KMK 923 AA,”

“Sketch marks of the scene were taken, the accidented cars were also evacuated to the Igbogene Division for further inspection

“The corpses of the victims were deposited at the Niger Delta University Teaching Hospital, Okolobiri while the injured passengers are responding to treatment at the same hospital.”