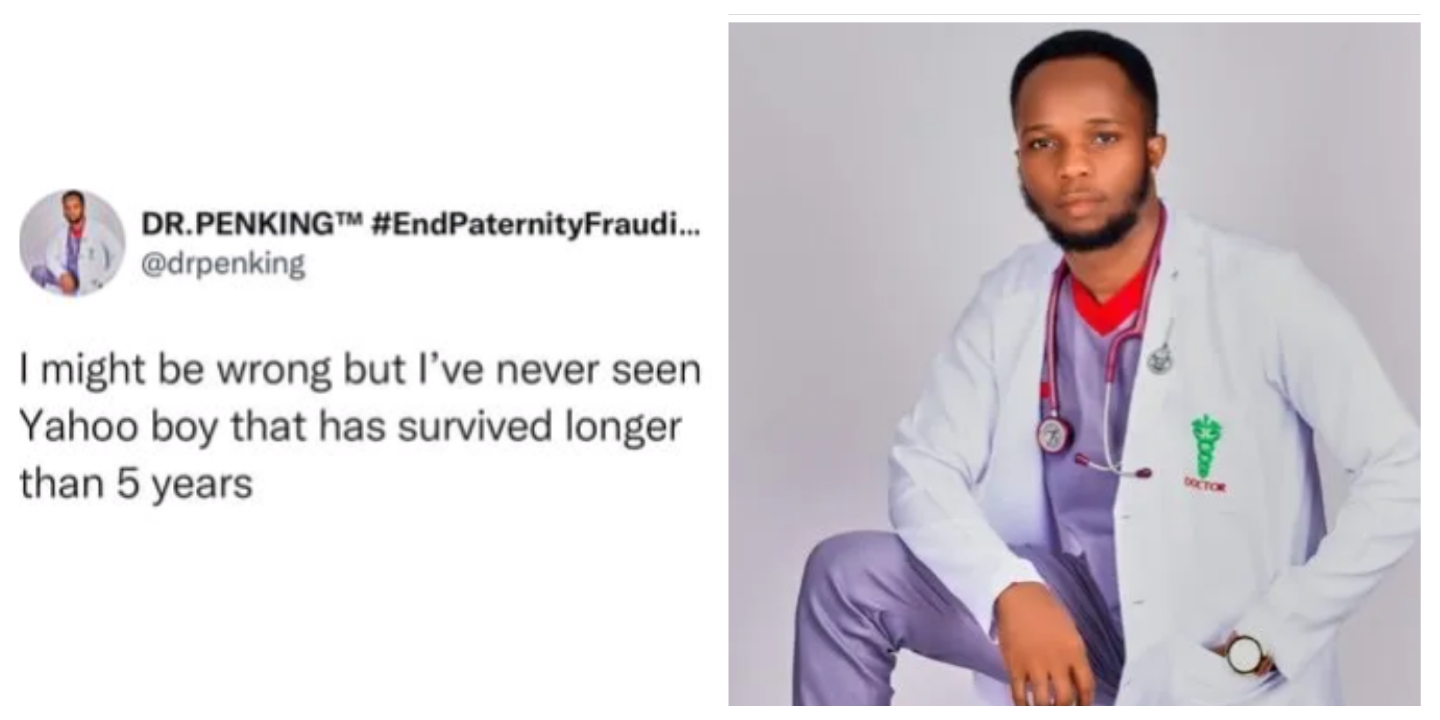 Dr. Pengking, stated that yahoo boys don’t last long in the business. According to him he has never seen a Yahoo Boy who survived beyond five years.

Seun Egbegbe reportedly abandoned by friends as he clocks…

Photos: Meet the biggest Nigerian scammer who sold a fake…

The doctor who took to Twitter, stated that they eventually get arrested or break the rules of the diabolical powers they are using.

I might be wrong but I’ve never seen a Yahoo boy that has survived longer than 5 years.

People who join yahoo compress all the money they would have enjoyed in a lifetime into a period 5 years. This is why they spend lavishly because they know they won’t live long.

Satan can’t give you something and allow you enjoy it for long. He must put a clause that will make you die soon.

Their end can come in several ways. They may break the rules of the diabolical means which they use to get their client to pay and hence run mad or die mysteriously.

Thy might end up in the nets of a body which they can’t bribe their way through e.g FBI

Don’t get intimated when yahoo boys spend money lavishly. They only have a few years to live. Their lives does not belong to them. They have to do unthinkable things like eating faeces with break, sleeping with mad women, bathing naked on the streets.

I once knew a Yahoo boy who barked like a dog once in a month. He couldn’t control when or where it would happen. Hence he was always with paid boys so that if it happened in public, they would bundle him inside his car and run away to reduce the embarrassment.

Do you know that some yahoo have rules like you can’t give someone you love money. You can only spend on them. Hence many of them can’t give their mothers or girlfriends cash? What is the joy of having money if you can’t use it and make someone you live happy?

It’s sad that people now openly endorse fraud and ritual money but deep inside these people, they are or happy and it’s so depressing knowing that breaking a single rule can cost your life.

Nothing will ever beat hardwork and legitimate money. Don’t feel bad when they buy bottles for 1m in the club or steal your girlfriend with expensive gifts or drive the most flashy cars. If you’re surviving with legit money no matter how small, you’re still better off .

You’ll live long and you’ll have peace of mind and God will bless you one day. Don’t lose hope.