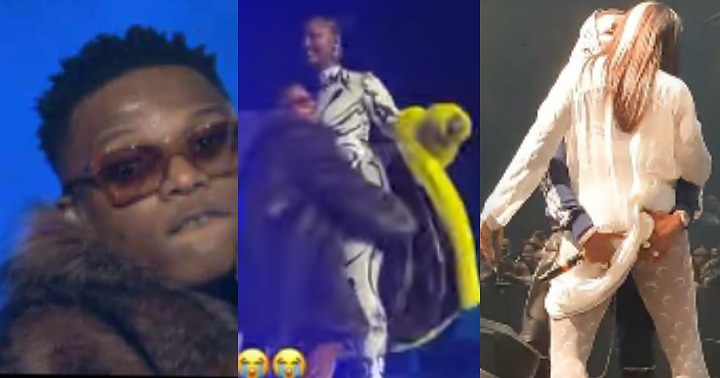 Fans have reacted to a video of singer, Wizkid trying to touch Tems’ backside on stage and lift her up.

This video was captured during the ongoing “Made in Lagos” tour at O2 Concert arena in London.

During a stage performance with Tems, Wizkid was seen trying to touch Tems inappropriately.

This act occurred during their performance of their massive hit song, Essence.

The short clip captured Wizkid touching Tems’ backside and trying to lift her up on stage.

This video surfaced on social media and sparked reactions. The negative reactions were even more fueled by the fact that Tems did not consent to the act.

Tems rebuffed his attempt by bringing his arms down gently and disengaging herself from him.

Fans did not let this slide and attacked Wizkid online.

“Mans was trying to grab her ass. It’s funny to y’all cos it’s Wizkid smh. Tf??”

“Wizkid forgets say Tems no be Tiwa Savage,” someone responded with laughing emojis.

Regina Daniels’ sister, Destiny shades Regina as she reveals one mistake she can never make