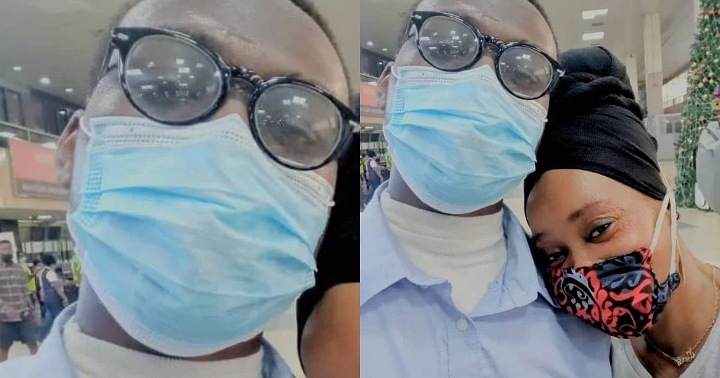 A grieving family has cried out after their son, Fadlullah Agboluaje, a student of Lviv polytechnic national university, Ukraine, was reported dead.

His sister, Rofeeha, in a recent post, stated that her brother landed in Ukraine on Sunday, January 9.

Upon arrival, he told his family that he didn’t like the room that was assigned to him because the heater wasn’t working, and other faults.

She said he complained to the front desk officer of the accommodation facility but he couldn’t communicate properly with him because he didn’t understand English.

According to her, Fadlullah eventually contacted his liaison officer and he was told to see him the following day.

Sadly, he was found dead on the floor of his room on Monday, January 10, barely a day after he arrived Ukraine.

“How did my healthy brother die in Ukraine overnight? That’s my brother, Fadlullah Agboluaje, in this picture with my mum at Murtala International Airport, Nigeria. He took off from Nigeria on Saturday 8th January, 2022 and landed at Ukraine on Sunday 9th January 2022.

He got picked up from the airport by Lviv polytechnic national university’s representative to the school accommodation facility this same day, 9th January, 2022.

On getting to his designated room, he wasn’t happy with the way it looked and also complained that that heater wasn’t effective (swipe to see pictures) and my mum told him to request a change of room.

So he went to the front desk of the accommodation facility to report to the personnel on duty but unfortunately the person didn’t understand English so he ended up reaching out to the liaison officer, the undersigned agent on the letter the school sent before he left to Ukraine. This man asked my brother to see him in the morning the following day.

My mum chatted with my brother up until 11pm Nigeria time on Sunday. Then on Monday, we didn’t hear from my brother, all his calls were going through, messages were dropping but no responses at all.

My mum began to panic and began to reach out to different people for help as at afternoon time after we got no response from him all morning.

Then it struck her that she could copy the number of the liaison officer on the letter, so she began to reach out to him also.

Later that afternoon, he began to dodge our calls, keeping us in the dark.

He ended up picking his calls later that evening and then gave a student in that accommodation facility the phone to break the news that my brother was found dead on the floor of his room.

It was a big shock. My brother left Nigeria very healthy. He ran COVID-19 test as at 7th of January, and tested negative. He got the full COVID-19 vaccination, Took his yellow fever vaccine, ran a complete health check at our family hospital and everything came out fine.

After the the news was broken, we began to ask this liaison officer to send us his picture if truly he’s dead. He didn’t do so until early evening on Tuesday 11th, 2022. I couldn’t look at the picture until Wednesday 12th 2022 because I just couldn’t look at my younger brother dead. As an older one, you always want to fend for your younger siblings. It hurt too much to look at the picture but my mind needed to have a grasp of an evidence.

I looked at the picture on my uncle’s phone and my brother looked asleep in the blue shirt he wore from Nigeria as seen in the picture, fully buttoned up and in a blue thick furred coat.

They haven’t sent us another picture of my brother in his dead state.

They said they’ve ran an autopsy, where’s the official report?

What even happened to my brother?

We need answers, we’re being kept in the dark. We need justice!”