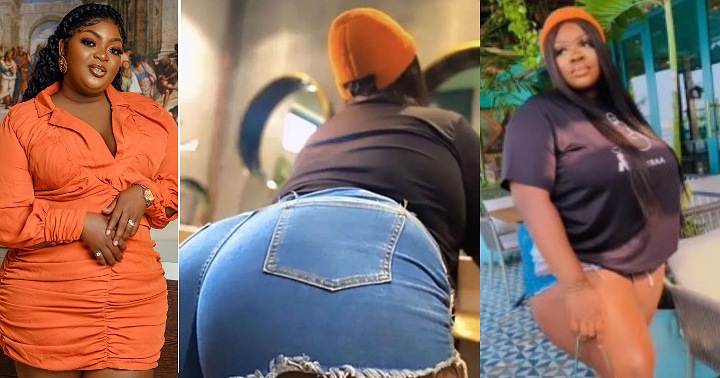 Nollywood actress, Eniola Badmus, has been called out for posting a curvy lady’s picture on social media and passing it off as her body.

Hours ago, the movie star took to her Instagram page to share a photo of a lady dressed in a hot blue bumshort with her face covered.

I’m the hottest, most talked about actress –…

However, a friend of the lady has now called out Eniola Badmus for stealing her friend’s photo and posting it on Instagram claiming she is the one in the photo.

Badmus recently became an internet sensation after she started her weight loss journey and underwent a gastric bypass surgery which totally transformed her look.

She also admitted that she has been getting a lot of attention since she lost weight.

However, she shared a picture on her Instagram story showing the curvaceous backside of a lady in an alleged attempt to make people believe she is the one in the picture.

The friend of the lady in the picture reached out to controversial Instagram blogger, Tosin Silverdam, to report the ‘incident’.

“I started ashewo work in secondary school, I don’t know who…

Why would you wish for me to go back to prison? – Kemi Olunloyo goes…