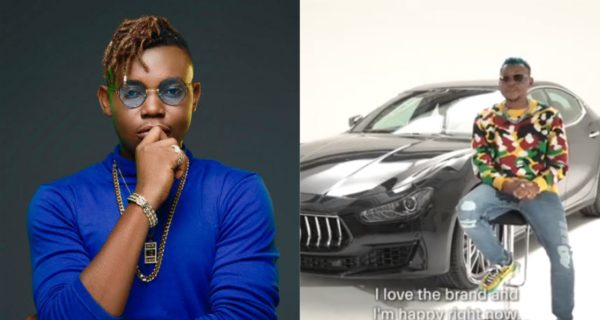 Sensational singer and songwriter, Olakira, has been named a brand ambassador for Maserati, an Italian luxury carmaker.

On Monday, January 24, 2022, the singer revealed the new ambassador contract in a Twitter post, as he celebrated a great win to start the new year.

“This is a real brand ambassador” – Portable praised as he…

Olakira who came to the limelight with the release of his hit song “Maserati”, uploaded a video of the latest news and said that it still seems like a dream to him.

To complete the ambassador deal, Olakira was given a brand new Maserati car, by the company. He expressed his admiration for the brand and stated that he feels honoured to be affiliated with it.

”Starting my own 2022 with this win! feels like a dream but an official deal with Maserati is now sealed & signed #OlakiraXmaserat”