Liquorose finally responds to interviewer who asked about her hidden baby 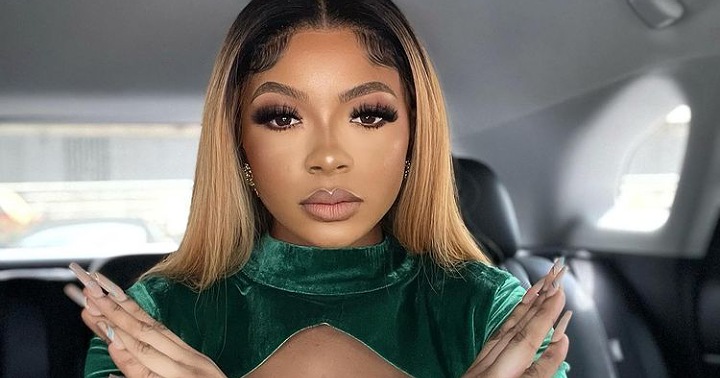 Big Brother Naija Season 6 housemate, Liquorose, was a topic in vogue after she was accused of having a child.

Concerning the allegation, the BBNaija star has finally cleared the air in an interview with TVC.

A twitter user, identified as Victoria took to her handle to state that:

“Liquorose hid her child from the public and Emmanuel also hid his girlfriend. I Stan favs that are private”.

“Liquor fans attacking me in my dm, pls ask your fave to tell you the truth, she has a baby!! I was shocked she didn’t mention it in the house, waited till the end of the show, but not even one talk about her child, y’all should free me biko #BBNaija”.

A lot of other comments had circulated with regards to this rumor.

On Wednesday last week, Liquorose finally addressed the issue as the interviewer asked her:

“There was something that went viral talking about you having a child or something “.

“Oh my God! I didn’t know what was happening. I was in South Africa then. That thing happened and I just went live that evening. Then I was just talking to my fans and they were like ‘Oh Liquorose, do you have a child?’.
I was like ‘I have children. I was listing like my nephew’s name, my niece and my cousins’.

And they were like ‘Oh, I thought they said you have four, you have five?’.
I just thought it was like a normal joke. Then Ifeoma called me while I was live like ‘I sent something to you’.
Ifeoma was now like ‘did you have a kid that we didn’t know?’

I’m like ‘what?’
They were like ‘oh she’s hiding the child in the house’. Naaa.
I have children though. They’re my niece, my nephew, my cousins. There’s no baby yet”, she said conclusively.