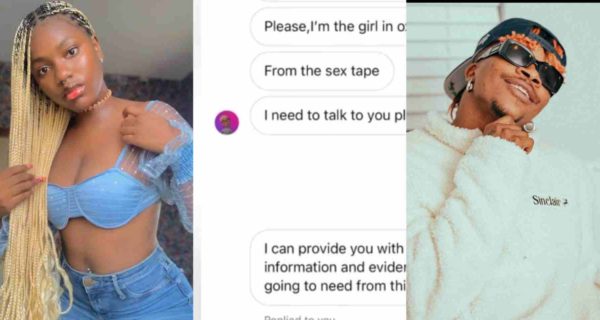 The woman in singer Oxlade’s bedroom clip, which went viral months ago, has resurfaced to demand justice.

The lady who contacted the controversial blogger, Gistlovers, indicated that she had no idea Oxlade was filming their pleasurable moment.

She was dating Oxlade at the time, so it wasn’t a matter of paid [email protected] services, according to her.

She has been angry of Oxlade’s treatment of her after the issue broke, claiming that he leaked the videos on purpose to advance his career.

She also stated that if sharing more explicit content of the artist is the only way to get back at him, she is willing to do so, since her life has been in shambles since the videos were released.

Gistlovers while sharing the convo wrote:

“Hello tueh tueh, Oxlade you nor do am well oooo, Mr Tatatata,babe say your own gbola full him phone and una Dey date say you intentionally leak that video to blow, as I Dey like this my phone don full for your prick, shey them use spit do your papa??😂😂 everytime spit spit, anyways Na Telegram go settle this matter, make Mark no go collect page , Justice for this girl ooo, THEM CARRY YOU GO COURT YOU NOR APPEAR, Na ment??? I come in peace ooo, Telegram yaaaaaa🚶‍♂️🚶‍♂️🚶‍♂️
#justiceforoxladegirlfriend #stoprecordingyourselfduringsex”