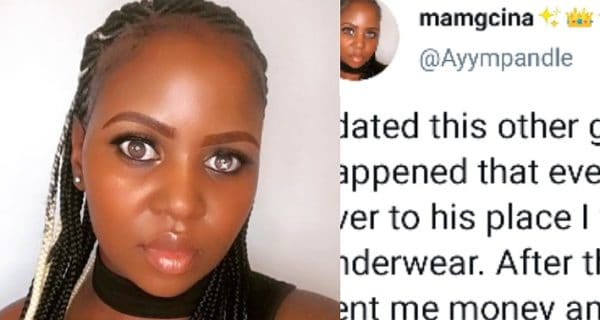 After her partner discovered she was wearing the same underwear always, a Twitter user with the handle @Ayympandle detailed what he did.

Pandle admitted that she kept showing up at his place in only one pair of panties, and that she became humiliated after her boyfriend gave her money to buy new underwear.

Lady shows off the job that fetches her cool N2million…

“I dated this other guy & it so happened that every time I went over to his place I wore the same underwear. After the third time he sent me money and said “since you’re at the mall please buy me toiletries…and babe you can buy some nice underwear with the change”😭😂ndafa fi!”

In other news; Ifeanyi Njoku, a young guy from Lagos State, has been nabbed for reportedly killing his girlfriend, Precious Okeke, 24, in an estate in Badore, in the Ajah region of Lagos State.