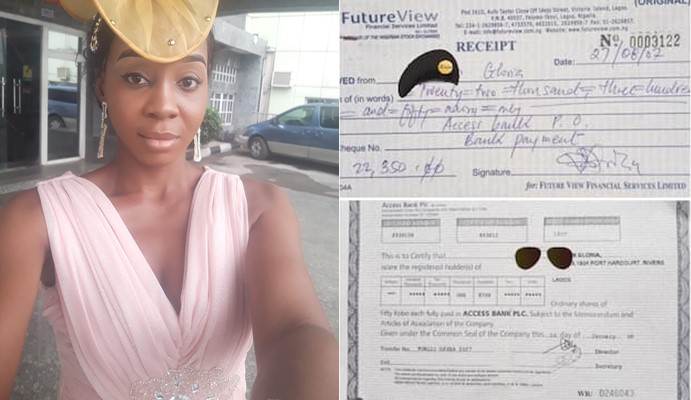 Gloria Ogo, a young Nigerian lady, sold the shares she purchased more than a decade ago with no appreciation in value.

She revealed in a Facebook post on Monday that the shares were purchased for N22,300 in 2007, at a period when Bitcoin , a decentralized digital currency, was worth less than a dollar.

Nigerian Police begins haunt for lady who said she was paid…

Lady gets physical with bank officials, security men over…

The lady presented a receipt for the purchase of bank shares in 2007, noting that she only received N6k prior to the sale.

Joseph Nkeanyichukwu; Corruption happened to it

Chika Moses Chris-Achinihu; Same with me, mine even worse. Bought 2005 from a Bank. after it was acquired and made ordinary shares of 5 units as 1 units. My 50 units turned 10 units. Access acquired Intercontinental, and turned the 10 units to 2 units.

Nuga Temitayo Olanrewaju; A guided and well informed investment in property would never give you such result…
Contact a registered Estate Surveyor & Valuer (the real property experts) for advise…

Portable excited as E-money flies him to London (Video)