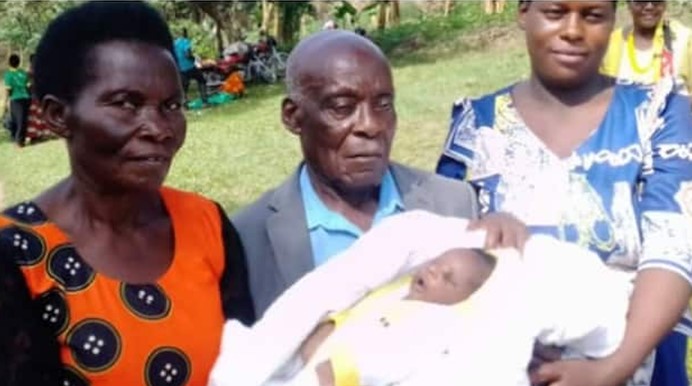 Mzee Yosia Mwesigye, an 83-year-old Ugandan man, has become a parent for the first time since his first marriage decades ago.

After his first wife died at the age of 79 without bearing any children, he welcomed his first child with a new woman.

Mzee said he waited for 57 years with his late wife, adding that doctors said she was fertile but he has no regrets that she was not able to take in.

The Octogenarian married the love of his life, Jane Tukamuhabwa (now deceased) on 25th of April, 1962, while he was only 23 years old.

He remained faithful and stuck with her through the trying times, hoping that one day they would have a child, sadly his wife was diagnosed with cervical cancer in 2005, and she died in 2018.

“We did everything together but it was so unfortunate that she passed on without giving birth,” he said.

Years later, Mzee found love again when he was 79 years old after his sister brought a woman to visit him at home and she later became his new wife.

“I am so happy that God has blessed me with a child at my old age. I never thought of getting one but I kept on praying and finally, God answered my prayers and now I am a father.

“Dying without a child is such a painful thing. In our African culture, one is only remembered when they leave a child on earth,” the elderly man said.