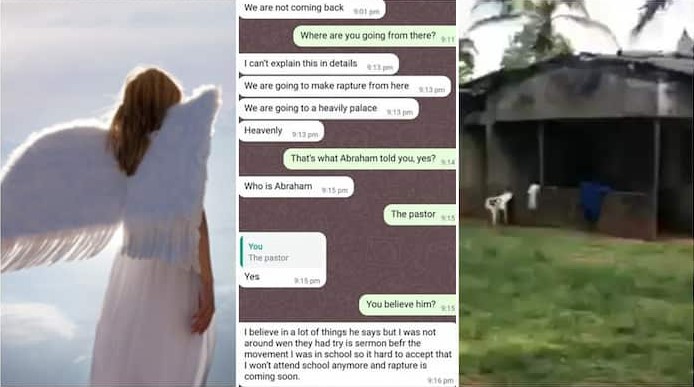 Pastor Ade Abraham of the Christ High Commission Ministry, aka Royal Christ Assembly, in Kaduna State, is said to have persuaded members of his congregation that for N310, 000, he can fly them to heaven.

According to reports, he relocated from Kaduna state to Ekiti and created an ascension camp.

Some congregants are already in the camp, preparing for their ascension when the world ends, according to a video circulating on social media.

Pastor Abraham informed the congregation that they will all “ascend to heaven together” from the Ekiti camp, according to reports.

“My relative has also asked her daughter, who is studying abroad, to return to Nigeria, or else the pastor (Abraham) would make her commit an offence over there that would see her go to jail,” a source revealed.

The unbelievable story was reshared by Instablog9ja, which also posted videos and screenshots of a chat between the abovementioned woman and her daughter who is based abroad.

‘My baby, my valentine’ – Mercy Johnson hails Destiny Etiko for flashing her nippl£s on the streets of London

Wizkid reveals how much he charges to perform (Screenshot)