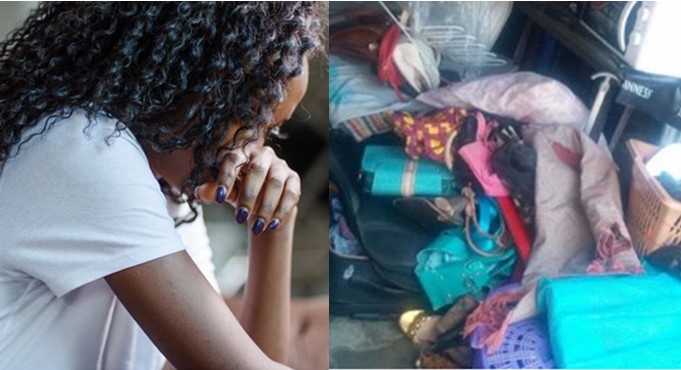 A newlywed wife has reportedly been dumped by her husband due to a lie she told before they married.

She is said to have claimed to be a virgin, but after tying the knot, her husband discovered it was a lie and chased her out, demanding the bride price.

@ChukwuSomma, a Twitter user, shared the story on the microblogging platform, noting that the couple had only been married for four months.

”A girl from my area had her bride price returned and bags packed back to her father’s house because she lied to her husband about being a virgin. This is just a marriage of 4months😰….so men still do this?? Omo!” 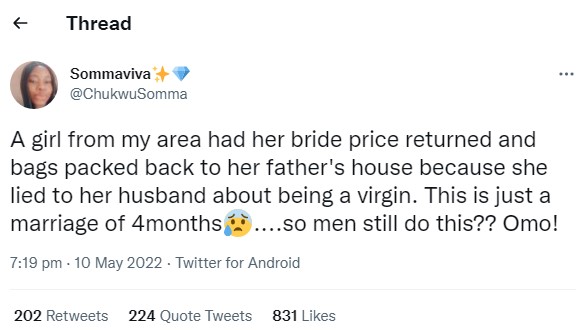 The story sparked a debate online.

Reacting, @callmebrowni wrote; Why did she lie? You don’t build marriage on lies. To her it might be nothing, but to the guy he will see it as if she can lie about this then could have as well lied about many other things

@KingJemx commented ; Why did she lie? The husband is well within his rights to return her cos the marriage was contracted on deceits.

@ChukwuSomma replied; I know but other measures would have been used to restore peace first before ever considering divorce. But the guy no send again

@mijenwadecoy; The reason she was sent packing is because she lied. Please don’t blame it on the virginity. If she had told the truth we won’t be having this conversation.

@PrinceMiracle22; Wait, who is to be blamed now?