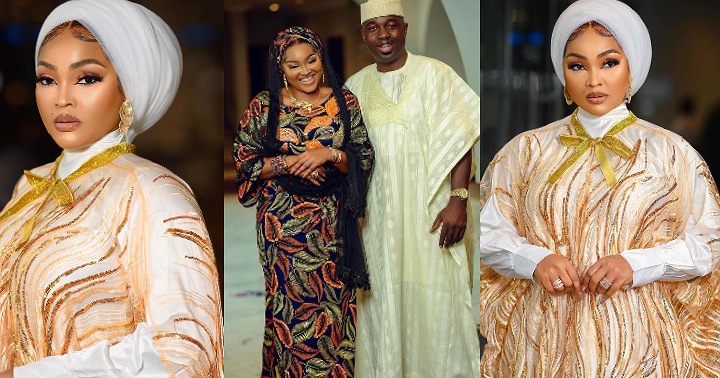 Popular actress, business woman and mum of two, Mercy Aigbe, has revealed how her husband always advises women to cover their bodies.

The controversial actress who often shows off her legs and other body parts, defended herself against her husband Kazim Adeoti’s statement on women who cover their bodies.

Mercy Eke reacts after being accused of fighting with MC…

In an Instagram post, Mercy Aigbe, disclosed that her husband told her that women who are fully clothed exude so much beauty. She, however, believes in versatility.

Reacting to his quote, the 44-year-old controversial actress posted photos of herself fully clothed in an outfit that has been recreated by many, saying,

“This look Trendsetter!…………….I dare say the most Recreated look of 2022 so far! As in even Non Muslims love this look! And i see a lot of women using it for their birthday shoots, i am super happy to see its now a style that appeals to a lot of beautiful women across Strata, Religion,Tribe and what have you.

Style Inspo for a lot of gorgeous women. Like hubby always says, a woman fully covered exudes so much beauty. My own style is versatile sha oh!”

Ever since I stopped telling my mum about my life, I’ve started progressing – Man says