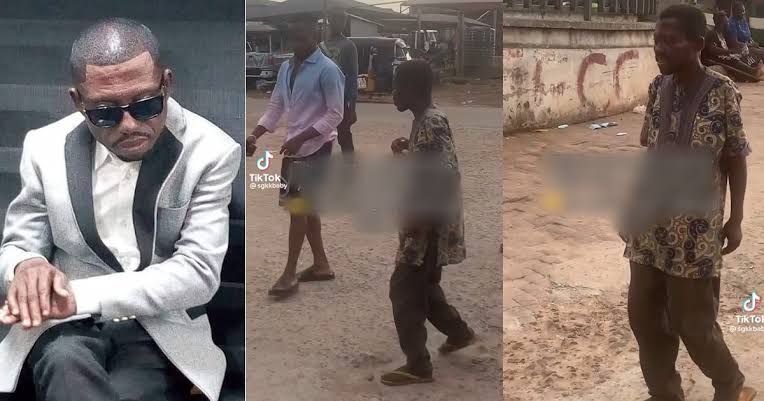 Sometime in 2018, a man who was said to be mentally unstable went viral on the internet after videos of his “spelling” were shared online.

The hilarity of the videos went viral on social media, and he quickly became a meme, with netizens mimicking his videos and finetuning them into songs and other forms.

Mr Spellz was discovered on the streets, and according to a video that was recently shared online, it appears that he has returned there — in the video, Spellz was spotted begging for alms at a mall in Abia state.

When Mr Spellz went viral in 2018, a US-based Nigerian singer, Morachi reacted to his sudden fame — Morachi who admitted that fame might be good for Mr Spellz, however asked what use is fame to him when his mental state is not in the right frame.

He wrote at the time,

When you speak the truth they call you a hater which is why people like myself often time ignore pressing issues affecting today’s generation & mind my business.

Why are we promoting abnormality & putting it on the world map? So this MrSpells is now a celebrity? He now goes on radio tours & now taking pictures with female fans? Like seriously ? Y’all had better take that man to the hospital or rehab & check his mental health first if y’all truly wanna be Good Samaritans than give him fame that won’t do shit for him!!! Y’all fucking jokers!!! Y’all Keep deceiving him or exploiting him!!! The fame is good for him but what use is it to him if his mental state ain’t in the right frame ?

They re mocking, Laughing, Ridiculing & exploiting this man & using him to entertain & gather contents for themselves over timberland boots & starboy jersey & some little peanut in his pocket & say they are helping him? Lord May you never bring such funny looking helpers my way!!! This is the last i am going to post about this”

I am here speaking on valid topics & low life mentality driven fowls are here jumping off points about how i post thirst trap videos like y’all don’t enjoy that shit in your Hollywood movies from your favorite decent actors? Or y’all don’t know certain things are for entertainment?

If all i ever post are thirst trap videos from Monday’s to Sunday’s & Jan to December like the instagram big bootie girls then y’all can have a problem with my content but if i spice it up with music , thirst trap once in a while , showing love & support to artistes i enjoy their music, fitness motivational videos and inspiring post then y’all need to shut the hell up or get yall entire village people to come for war y’all will never win!!!! I have got the strongest immune system ever so y’all should do better with the attack’s