Yul Edochie, an actor, is currently under fire for involving her daughter in his ongoing marital crisis with his wife, May, after breaking her heart by impregnating another woman and marrying the woman without his wife’s consent.

Yul Edochie, desperate for public approval for his political ambition, went on to share a photo of his teenage daughter after being thrown in the mud by his wife, who exposed him for posting an old video of them in a bid to deceive the public of a reunion.

The action earned him a backlash from his fans and followers on social media.

One Elvin Ekah responded saying “In few years to come you go surprise how much dis your daughter go change towards you , you go come di wander wether na her mamma put hatred for you inside her , NO . Children NEVER FORGET the pain… you cause their mother no matter how much you later reconcile with them . Time will tell better .”

One Milicent wrote “Why not leave d innocent kids outta ur vanity. As if they are on such page with u at d moment” 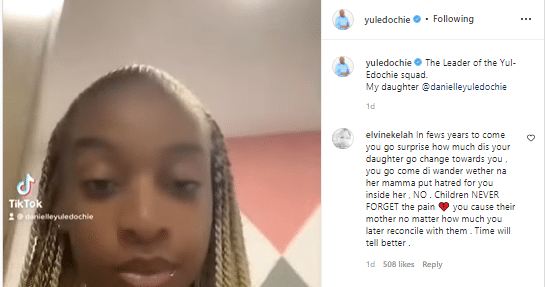 As if the backlash wasn’t enough, he went on to post a photo of his three boys, which further infuriated Nigerians.

One Jovi wrote “Leave the kids out of this una mad.ness. Protect them from online and offline bullying.”