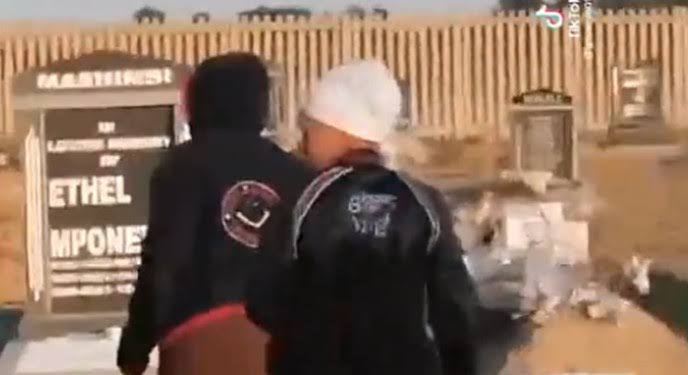 A South African man visited his late mother’s grave and met two women who are alleged to be her sworn enemies.

He confronted them after seeing them by his mum’s grave side, speaking inaudibly and holding candles despite the fact that it was daylight.

According to a South African blogger to reported the news, the man suspected that the women wanted to complete a spell they cast on her whilst alive.

In a video which has gone viral, the man challenged the women on their reason for being there until they entered their car and drove off.

In Other news; As a result of an affair with a married man, a Tanzanian woman has purportedly been turned into a cow.

Her legs turned into cow hooves, and she sprouted a tail, much to the surprise of the locals.

The lady can be seen sitting on the floor with her hoove legs out and visible under her wrapping in a video that has gone viral.

According to some reports making the rounds, she stole another woman’s spouse and enchanted the man’s wife when she discovered out about their romance.

‘If you can’t invest in your kids, don’t birth them’ – BBNaija Bam Bam issues warning to parents