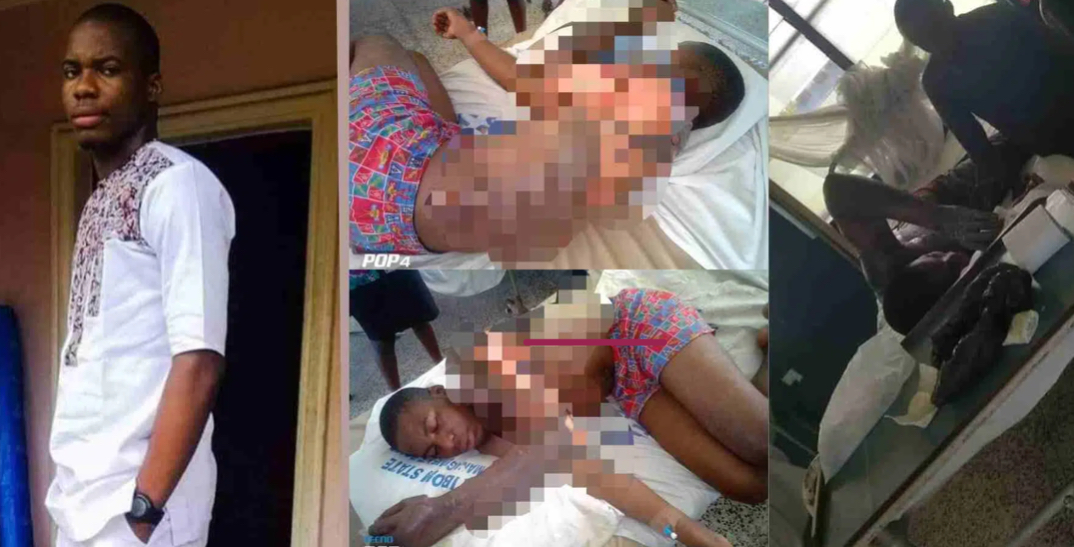 Tensions were high at Akwa Ibom State University after a 200L student from the department of Philosophy, Enwongo Akpan, was set on fire by an indigene following a verbal altercation.

According to reports, the incident occurred on Sunday, July 10th, when the lad got into an argument with an indigene who sells fuel in the area, and as things heated up, the unidentified community resident poured fuel on him and ignited a spark of fire, causing the comrade to sustain severe injuries.

Akpan was admitted to a nearby hospital for immediate treatment but was later transferred to the University of Uyo Teaching Hospital (UUTH) for proper treatment.

Nigerian man flogs his girlfriend for allegedly cheating on…

Lecturer teams up with staff to forcefully shave student’s…

The school authorities and Police are said to have swung into immediate action.

It’s a sad Sunday afternoon in the academic community of the Akwa Ibom State University, Obio Akpa Campus, Oruk Anam LGA as Comrade Enwongo Akpan, my friend, a 200 Level student of Philosophy, Faculty of Arts was a victim of an accident where a road side fuel retailer poured him fuel and set him ablaze after an argument on the fuel been adulterated.

Enwongo has now responded to treatment at the Mercy Hospital, Abak and in the next few minutes will be transfered to the UUTH, Uyo for more adequate attention.

I call on my colleagues and Comrades to keep calm as the Vice Chancellor, Dean of Students and Village Head are headed to Udoidiong junction to calm the situation on ground. I further plead to Akwa Ibom State Government that ADEQUATE MEASURES OF SECURITY be taken to keep the students safe in Obio Akpa community safe as the clashes between students and indigenes have become reoccurring and uncontrollable in recent times.