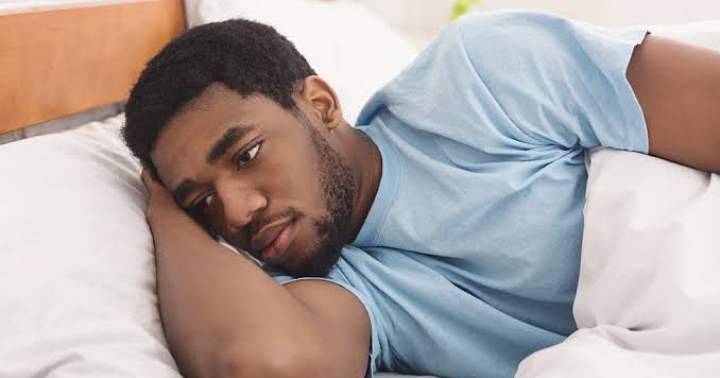 A young Nigerian man has shared his embarrassing ordeal after bringing in a woman to sleep with at his friend’s house.

According to him, his colleague at work had borrowed his hard drive from him but forgot to return it causing him to go to his colleague’s house to get it as he needed it urgently.

He colleague had given him the keys to his house as he was travelling.

However, when he got there he got distracted by how beautiful the house was and went ahead to invite his babe over until the unthinkable happened.

He wrote:
“Sometimes just respect yourself and save yourself from unnecessary stress.

A few years ago before we started saving all our stuff on the cloud & paying for Netflix subscriptions, I had this hard drive where I used to save everything. From work documents to movies I had downloaded.

One of my colleagues & work friends had asked to borrow the hard drive to transfer some movies to his personal laptop as we were prohibited from taking work laptops home or bringing personal laptops into the office.

Even that hard drive was contraband so i left it in the car & after work i gave it to my colleague. He kept forgetting to return it & even me i forgot to ask for it until the upper Friday when my colleague was taking a half day to travel.

I urgently needed a document from the hard drive & he had come to the office without it, he claimed he actually brought it out but forgot it on the table or something. So he gave me his house key because he was going to the airport from the office & told me where to hide it when i picked up my stuff.

No problem, that night after work i went to his house to quickly pick it up & head home.

Omo when I entered his house the tv was so big, in fact the house sweet die.

I was wondering how much this guy was earning, clearly he was on a higher grade level.

Anyways, i took my hard drive as it was on the table like he said but as i was leaving one evil spirit whispered to me “to watch match here go sweet o” me too i now carried the key with me planning to come back on Saturday for match.

I won’t name my club before we receive unnecessary insult. The next day I came with refreshments so I’d be very comfortable while watching the match.

Luckily or unluckily we won that game, I was so happy that another evil spirit led me to call one babe i used to link up with that time. Yes, i invited a babe to my colleague’s house, she didn’t even ask whether i moved since that wasn’t my usual place.

That night when she came we chilled then we proceeded to fornicate on my colleague’s bed (not my proudest moment). Don’t know if it was the foam or the joy of winning that pivotal match because I was performing like never before. The babe would shout “harder” me too i would go harder until I heard “kpaa” na so bed break.

Omo, everything cleared from my system because my colleague was returning on Sunday in order to make work on Monday & I wasn’t sure the exact time of his flight. It was almost midnight & I didn’t know where to start finding carpenter to repair the bed.

What was my excuse for the bed breaking when I was only supposed to dash in & pick something? I messaged every carpenter I knew nobody answered me.

I told the babe to come & be going that i had bigger issues on my hand. I think that was the first time I stopped mid-s*x, that “kpaa” restored factory settings. Since i couldn’t reach any carpenter to tell them to show up at like 6am I decided to fix it myself. Even if i was able to reach anyone, the next day was Sunday it would’ve taken a miracle. I asked the gateman if he had hammer & nails, he said no so i started driving around to see if any of the 24 hour stores had something I could use.

By God’s grace I found some nails but no hammer & after reaching out to a few people to ask for hammer at 1am I decided to just look for a big rock. I succeeded in fixing it even though I knew one act of physical activity on that bed would’ve broken it again but at least he would think it was his fault.

By the time I finished my carpentry & cleaning, it was almost 4am. I made sure everything was exactly as he left it, I even made sure the tv was on the exact channel he left it on before I switched it off & drop the key in peace. Sunday evening I didn’t receive any message from him & the next day in the office he didn’t say anything to me about his house, everything was normal so I guess it worked out. Thank God o.”