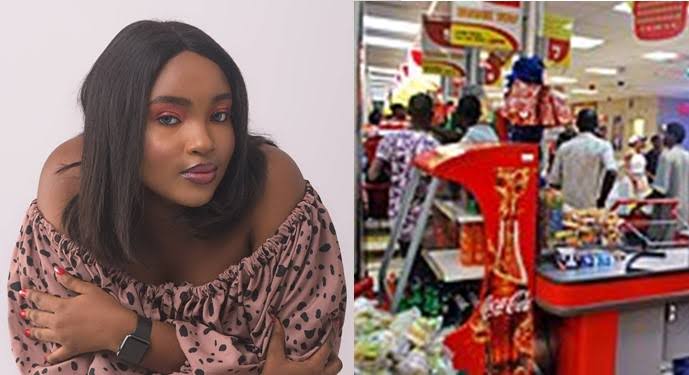 A Nigerian lady simply known as Chiamaka has taken to microblogging site, Twitter to reveal what happened between her and an admirer at a supermarket.

According to the young woman, he wooed her while they were shopping but when time reached to pay, the guy showed no interest in paying for her.

She said when they both reached the counter, her ‘toaster’ just looked away after seeing the items in her basket.

Young man bursts into tears after losing his transport money…

According to Chiamaka, the way he refused to even look at her while at the counter made her laugh hard.

She tweeted; ”One man toasted me at the supermarket today. We reached the counter to pay at the same time and he did as if he didn’t know me 💀💀. I mean, I wasn’t going to ask him to pay but the minute he saw my basket, he just looked away. Omo the way he didn’t look at me at all killed me. I laughed so hard.”

One man toasted me at the supermarket today. We reached the counter to pay at the same time and he did as if he didn’t know me 💀💀.

In reaction, @whitenigerian__ said; He never get admission you wan make him pay for school fees

@UncleJahmal; He should have helped you hold your basket whilst you swipe your card for your stuff and his stuff too. He jinxed the opportunity to chop your money.

@lagold001; Nigga went and embarrassed himself 🤦‍♂️We always put ourselves in positions that makes us not only belittle ourselves, or kinda boundage.

You don’t owe her or have to pay her bills. Or the entitlement we gave them that we should pay her bills cus we met at a supermarket… act normally and mature. Lobatan🤷‍♂️ no stress
Omo the way he didn’t look at me at all killed me. I laughed so hard😂😂

@Qsallyb; 😂 I anticipated the end cos this has happened to me before

@shollyfella; Don’t blame him, the sight of your basket prolly triggered ptsd from past experience.

@Tomisinfoluwa; You didn’t go with your money before?
You people will just be acting senseless and let these men wash u all the time
You deserve all the ratio and more ole

@LytSkinnedGirl; He was afraid, Man had PTSD. He doesn’t want to talk now before he will be tempted to pay for you, and then regret it.

@UnlimitedEniola; He doesn’t have and that is why he looked away. His ego won’t allow him to smile. Do you know how humiliating it is? Men are givers, especially to the ones we like. May God bless every man out there.

@HabzyKing; Women sha, she was expecting him to pay but baba sojunu. Wherever you are Mr man you earned my respect✊.

@Mai_kelz; This is not the flex you thought it was. You are embarrassing yourself for real.
So if nobody “toasted” you at the supermarket you wouldn’t have paid for what you picked??? 🤡

@77_Kiah; crazy how I go tell you to go pick more groceries, make I pay. it’s just how I’m built

@oris616; You should have asked him not to worry that you will pay for him,make you do big girl

@Dir_Shenkes; If the guy had paid,we wouldn’t have gotten any story right

@alongetheestall; toasting at the supermarket is wild tho because na direct billing be that. but a king 👑.

@ROS1609; he was supposed to just pay now… see how he goofed, guess you will not be picking his calls

@Rilwwan; Once asked a girl out at the mall, she instantly declined, I said no problem and we get going. Then she said she wanted to get somtin in the mall. I decided to get one or two too. Then it was time to pay. I simply paid for mine and looked away. She sluggishly brut out her ATM.

@Danysleek; The guy just go dull.. If na me, I go dey toast you dey go, dey smile on top, as you dey pay for wetin you buy. After you don pay finish, I go enter gear 2, ask for your number while paying for my own stuff.