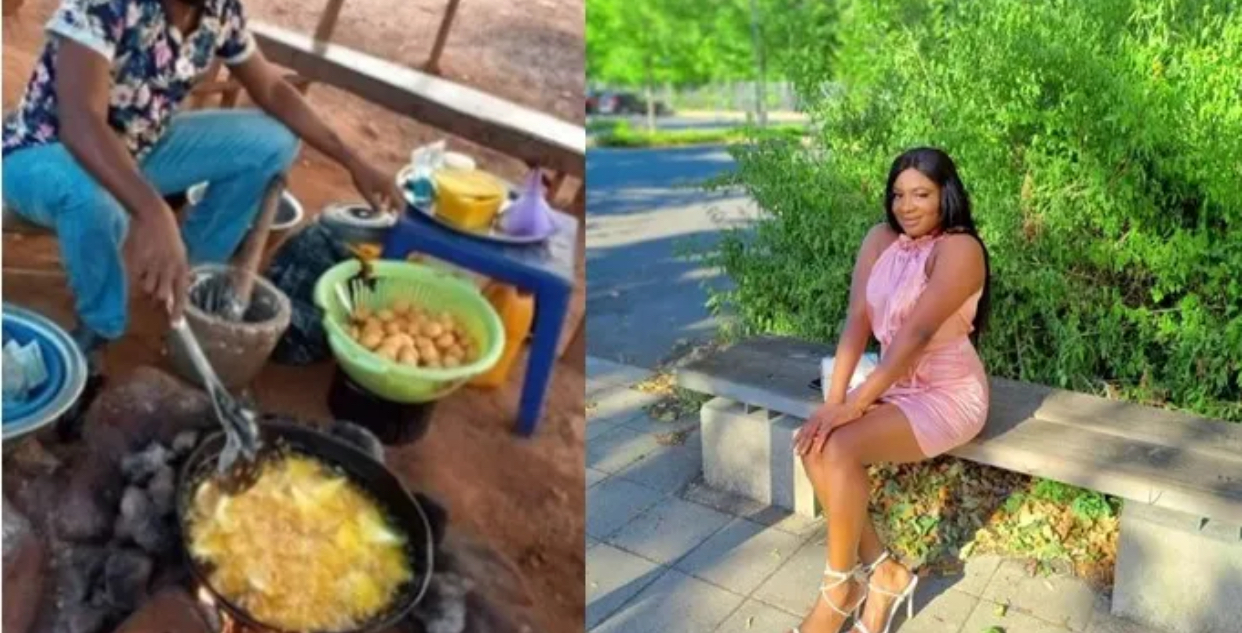 A Nigerian lady identified as Chinemerem, has revealed that she is indecisive on the matter of marrying her boyfriend, considering what he does for a living.

In a post on her Twitter page on Thursday, the young woman revealed that her man pays her tuition with money from his akara business.

But she is confused on whether it makes sense for her to agree to marry him after she graduates from the university.

The pretty lady who described her lover as ‘akara’ man asked for advice from users on the microblogging platform.

She tweeted; ”My boyfriend pays my school fees through his ‘akara’ business, but now I am confused. How can a graduate marry an ‘akara’ man?”

Meanwhile, netizens were outraged over her indecisiveness and they spoke their minds in her comment section.

@Christyidols; If he can pay your school fees he can take can of you . If you can’t marry me no be by force just settle him all the money he has spent on you + VAT you are Good to go

@ArchiNexzy; The response is nice, but returning the money is nothing compared to the sacrifice he made, do you know his situation b4 he sent the money? That sacrifice is worth more than the cash even if she pays extra. It’s well

@iamlasbrey; My dear, marry the man of your dreams. You are not obliged/indebted to marry any man you don’t want to

@ComputersVictek; But let her just pay him all the money he’s spent on her education back sha plus interest… Ungrateful human beings

@Dprincessolivia; After draining him, you r asking if u shld Marry him.. The school fees was it for dodo, beans abi garri?

@OlumideOjesanmi; It’s not her fault actually,the guy shouldn’t have trusted her

@Smart220177951; Make I meet you for where you dey talk this nonsense.. When my fellow guy was paying for the fees you didn’t kw he was selling akara. 😒😒Rabashi

@ombumorgan; As in ehn, a lot of women are ungrateful, make she sha pay am all the money he don spend for her head, every single penny even down to all the akara and food she don eat

@KelvinOsaigbov1; Some people confuse certification as proof of literacy lol, if it was so companies would be waiting for every graduate in school to get them to work for them, they want to see how u live ur life, how u perform n react to life, reason they interview u, clearly u dnt b🍂 in growth.

@ohiz_; Na that akara money send u go school wey u fit take type wetin u type so, Abi no be the akara money ? Iranu

@LemonadesWith; Why can’t you marry an Akara man? but you can take his money? have the fear of God o! Honestly, a hardworking person is better than a person who gets things handed to them, cuz even in adversity that person will still make something out of nothing.

@oluwabuyikunmi_; For starters if he can pay your fees all through your university days then he can no doubt take care of you, and if you don’t want to get married to him then please make sure to pay him all the money he spent on you in university cause you made that man waste so much!

@femistico; Why i go blame you now, na the guy i blame. After several warnings everywhere that stop supporting women financially…relationship is not a poverty alleviation program it’s the work of the government.. Why i go send babe go school con dey pay her schl fees??🥺wahala

@proffemzy1; Just gather all he has spent on u , return it , ndi graduate , just make sure he doesn’t see this , one other girl tried this with one man too , she ended up dead .. make sure to think so u won’t waste ur life

@Kirajoh38502524; I think u are part of d women that made some men don’t want to trust other ladies. even wen they are at d position to help them they won’t agree to help due to all this kind things💯y didn’t u tell him from d beginning so he can know he is only helping a charity organization.