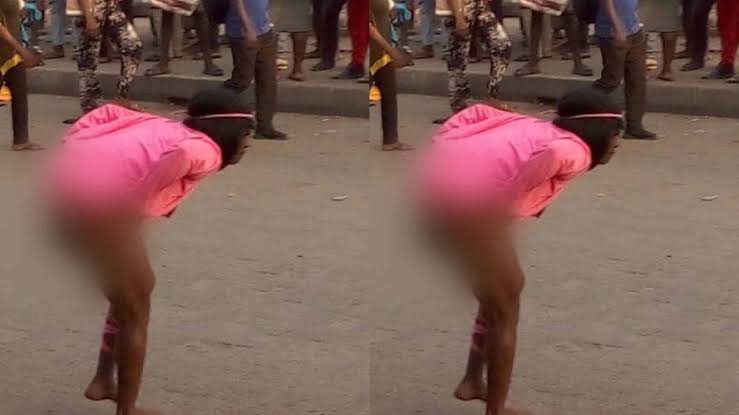 A middle-aged woman is said to have gone insane after being dropped off by an SUV at Obalende Bus Stop in Ikoyi-Obalende Local Council Area of Ikoyi, Lagos.

According to reports, after being dropped off by the car, she removed some money to buy bread, then she began acting strangely, attracting the attention of passers-by.

It’s said that the lady threw a way her bag and began chanting, “My head”.

Although the cause of her bizarre behavior is at the moment, unknown, onlookers who suspect that the driver might be a “Yahoo boy” have speculated that the owner of the SUV had used her for money riittual.

“I was shading by my wears when I saw a black coloured Toyota SUV parked opposite me on the road and a middle-aged woman alighted from the SUV.

I was shocked for a few minutes after the SUV zoomed off, the woman who brought out money from her bag to buy bread from a hawker suddenly threw her bag on a major road and shouted my head and started removing her underwear and started running around everywhere shouting. I believe the owner of the SUV must have used her for riiittual purposes.”

Yul Edochie brags about being one of the most talked about men in Nigeria; Netizens react