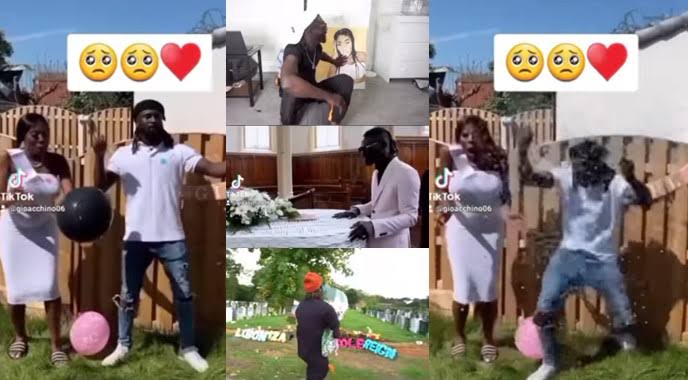 A sad video that surfaced online tells a story of a man who lost his unborn children and pregnant wife during childbirth.

The man known as Chino, had gone viral last year after holding a gender reveal event with his wife and he discovered they are expecting twin boys.

He shared a video from the party which showed him jubilating after they both burst the two balloons they were holding and blue confetti came out, which is an indication that his wife was pregnant with boys.

Sadly, she lost both babies while giving birth and the woman also did not survive the process of childbirth.

Chino went online again to post a video of him mourning his late wife. He could be seen in a funeral home crying while standing over her coffin.

A part of the clip also showed him weeping profusely while touching her portrait which sat on the floor in his home.

At the remembrance which happened a few weeks ago, he took flowers to her graveside to pay his respects.

The touching video story moved many to emotions and they bared their hearts.

quaintlyquirkysoaps; She was expecting twins 😢😢😢 oh no! 😭😭😭 So heart wrenching to watch 😫

mandy_jael_berry_woods; Can he ever get over this ? God heal him cus this is too heavy already 🥺🥺

macaulayrume; Damm how can he move on losing two of his treasures 🥲🥲🥲

favoureey; 😢😢😢this is so painful

big_vick147; So painful, i cried while watching it💔 Life can be so short and unpredictable🤦‍♂️

dark.skinned.baddy; I remember this actual video…. Such a beautiful and happy couple! So sad 😢