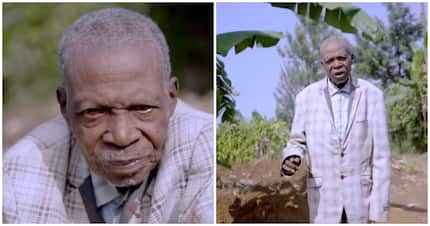 A 90-year-old man simply identified as Baizire Jean Marie has revealed that throughout his life, he has never slept with any woman.

Baizire stated that he has a primary level of education but it has not been beneficial to him since he was unable to secure any job with his certificate.

While speaking with newsmen, the 90-year-old man revealed that he spent his entire life in his village without going anywhere.

He said he wanted to have a child like other people but because he had not been in a romantic relationship with any woman before, he is yet to achieve his dream. His condition was however linked to unemployment.

“I am called Baizire Jean Marie. I am 90 years of age. I have been living in this village for my whole life and have never got married or met any woman. That means, I am still single.” He stated.

People living in the same community with Baizire confirmed his story and revealed that the 90-year-old man doesn’t have any illness that will stop him from having romantic relationships with women. They attributed his condition to spiritual problems.

Side chicks fight dirty in public over sugar daddy (Video)