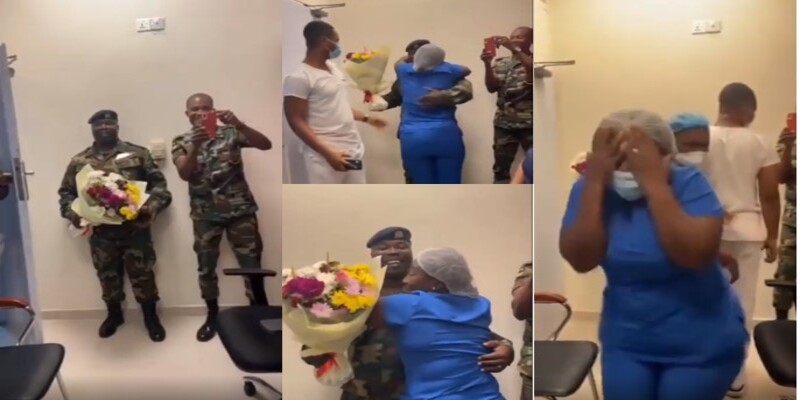 A Nigerian military officer has demonstrated that, aside from fighting for the country, they can also be romantic.

To celebrate his wife’s birthday, the man paid a surprise visit to the hospital where she works as a nurse.

He was accompanied by some of his colleagues, who were all dressed in their official uniforms.

“Happy birthday to the queen of my life”, Gedoni…

A video that went viral online showed the moment the Army men and the nurse’s coworkers planned how to surprise her. 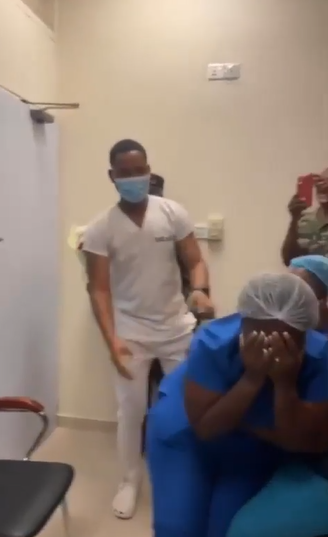 They ushered the woman into a room where her husband hid behind the door and as soon as she entered, they immediately started singing happy birthday songs while a Saxophonist played lovely tunes.

When the nurse turned back and saw her hubby looking radiant in his uniform with a bouquet of flowers in his hand, she was overwhelmed with emotions and tried running into the room she came out of, but she was stopped by a colleague.

She covered her face coyly as everyone cheered and continued to sing, then she moved closer to her husband. She hugged him and locked lips while still battling with how he was able to plan all that for her.