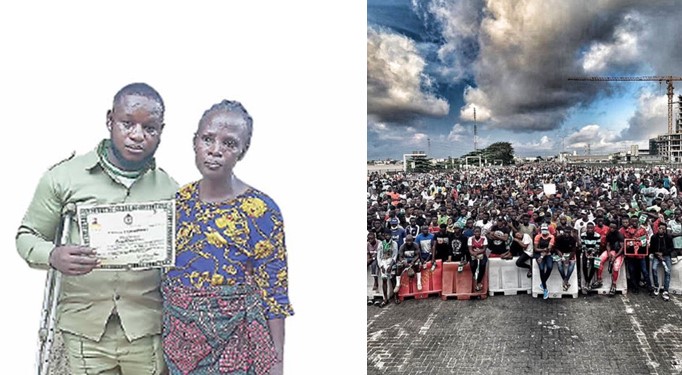 Stephen Ohaima, an HND holder lost his leg following his participation in the #EndSARS protest two years ago, but he has no regrets over his action.

The 30-year-old Edo State native, whose leg was amputated after he was shot during the October 2020 #EndSARS protest, says that though life has been a struggle for him, he does not regret being among those who joined the movement.

He shared his story in an interview with The Punch.

Crisis like EndSARS being planned over fuel scarcity in…

”I lost my limb in 2020. On October 19, 2020, I joined the nationwide EndSARS protest in Edo State. While we were on the protest ground, some men in military uniform invaded the place and started shooting at the protesters.

I ran to take cover but I was hit by a bullet where I was hiding. No one knew I had been shot. After the soldiers had left and people were coming out of their hiding, I spotted a guy and shouted for help. The guy called other people, so, they came to pick me up and took to the hospital. The first hospital I was taken to rejected me; they said my case was beyond what they could handle. I was referred to a specialist hospital for immediate attention. Due to the roadblock and the unrest in town, I wasn’t taken to that hospital but to another one.

The doctor at the hospital tried to stop the bleeding. He said I had lost so much blood and I had just four per cent blood left in me. They placed me on drip. It was discovered that the bullet in my leg had shattered my bone and destroyed the vein that supplies blood to that part of my body. So, my leg started having issues.

From that hospital, I was taken to an orthopaedic hospital where they thought they could manage the leg but on the third day, after seeing that they couldn’t do much to manage the damaged vein, they referred me to another specialist hospital. At the new hospital, the doctor recommended immediate amputation so that I could survive. At that point, the unhealthy part of my leg was already affecting the healthy part. At that point I had no option but to agree to the amputation.”

When asked if his leg being amputated made him regret joining the #EndSARS protest, he said;

”No, actually. I didn’t regret joining the protest. I know that I sometimes feel bad about my situation but I don’t regret joining the protest. I just believe that nothing happens without God’s knowledge or permission. I also believe that as citizens we have a right to protest and express our displeasure over unfavourable government policies or actions. It was wrong for the government to send soldiers to shoot at peaceful protesters.

When I joined the protest, I never had the intention of arguing or fighting with anyone not to talk of being shot. Sometimes I ask God why I am the person in this situation. I just had to brace up since I survived. Waking up every morning to realise that many things I used to do so seamlessly are now no longer possible for me; seeing myself with one leg really hurts me.”