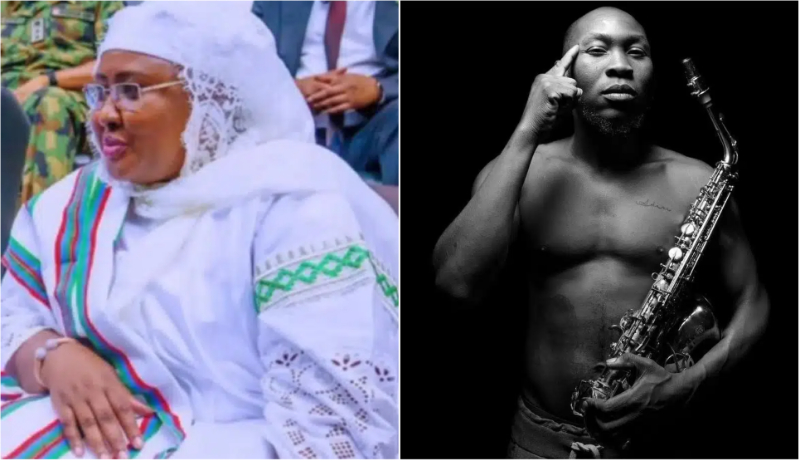 Fuji Singer, Seun Kuti has made a provocative video to the first lady of Nigeria, Aisha Buhari.

The son of music legend, Fela Anikulapo Kuti has charged at Aisha Buhari and called her fat.

In that regard, Seun Kuti, who is popular for always speaking his truth steps out to do the same and shared the president’s wife to get him arrested.

VIDEO: Singer Pasuma’s daughter over the moon as she becomes…

While calling her out via the image-sharing platform, he stated that not only is Aisha fat, but she got fat through the money meant for Nigerians.

Recall that few weeks ago, the first lady arrested an undergraduate for calling her fat.

According to reports making rounds, Aminu Muhammed, a final year student of Federal University Dutse, Jigawa was arrested by officers of the Nigerian secret police, Department of State Services on the basis that his tweet dated 2nd June is slander to the First Lady.

Muhammed in his tweet said the First Lady had suddenly added weight after taking part in plundering the nation’s resources as the masses endured hardship under her husband’s regime.

He Tweeted in Hausa: in Hausa: “Su mama anchi kudin talkawa Muhammed ankoshi”, which could be translated as “the mother has got fatter by eating masses’ money.”