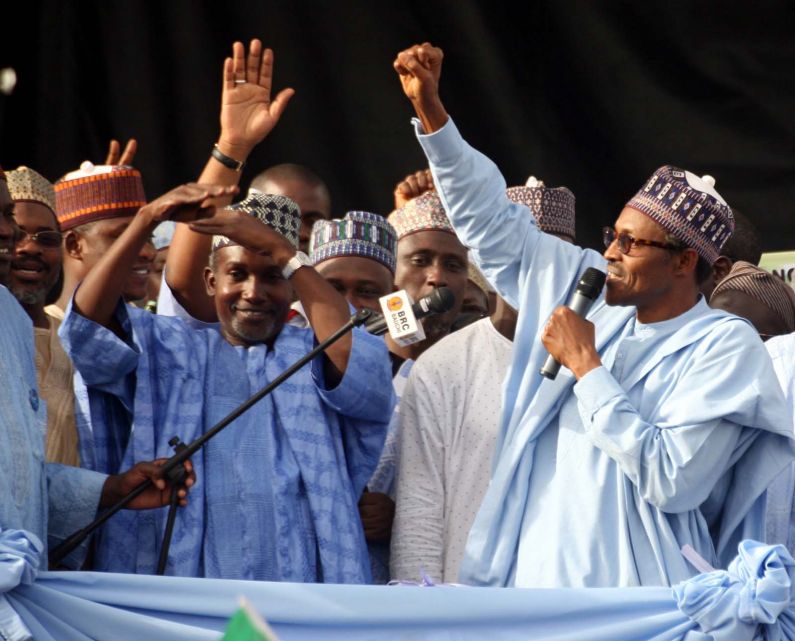 National Chairman of the Peoples Democratic Party, PDP, Alhaji Adamu Muazu has hinted that Nigeria will experience a combative and neo-military presidency in Nigerian government if Muhammad Buhari is voted as the President of Federal republic of Nigeria .

Muazy claims that the background of the All Progressive Congress, APC Presidential Candidate cannot operate in a free society as obtained at the moment.

According to the PDP national chairman, Nigeria needs a President that would further the democratic drive towards a free society that promotes freedom of the media and dialogue that will  heal the wound of the nation and Buhari does not qualify as a that candidate that can achieve that task.

“There are many reasons why Nigeria must not return to a quasi military dictatorship led by a war lord whose democratic credential are suspect.

“It is also important to know that the power of the President is awesome and if you give it to a man who is not coolheaded leader like President Jonathan, he will certainly throw the country into chaos at any time.”

PDP National Chairman sang praises of the President, Dr Goodluck Ebele Jonathan as he said, ” President Goodluck Jonathan is a tested and trusted democrat who is well experienced in running democratically elected government having been elected as a Deputy Governor, Governor, Vice President and now President of the Federal Republic of Nigeria.

“General Buhari is the product of military dictatorship that cannot operate in a free country, he is unlike President Jonathan who at all times favours dialogue and persuasion which are the hallmark of democratic governance.

“We don’t want a combative presidency, which would be busy witch-hunting perceived enemies for trumped charges, then jail them for 200 years. If you read his acceptance speech you will note the language employed show what direction his government will focus.

“The choice before Nigerians in 2015 is quite clear. Do you want a transforming leadership or a retrogressive return to a quasi military dictatorship clad in democratic toga or do you want an environment of human right abuses where people live in fear? Yet it is supposed to be democratic setting.

“All the gains of the past years will be lost when autocratic regime that General Buhari is known for takes over power in Nigeria “, explaining that this is the choice Nigerians will have to make in the February 2015 Presidential election.

“What is needed is a giant leap into democratic governance and not the return of the ‘Jack boot’ era of military in politics of the ‘kill and go’ of the past.

“Every nation at time need leaders that would make the needed and necessary sacrifice and this is what is what the re election of President Jonathan represents. All over the world, leaders with qualities of President Jonathan are being elected and not a drawback to democratic governance which the APC represent.” He stated.

A Woman Details The Adventurous Experience She Had With WizKid