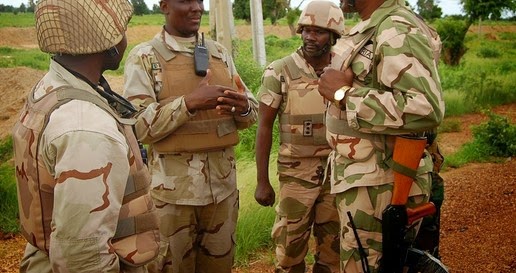 Share
A group of Army officers involved in operations against insurgents tagged “Operation Zaman Lafiya” have written an open letter detailing a series of problems bedevilling their military operations.

In addition, the officers called on President Goodluck Jonathan to investigate massive looting of funds meant for military operations.

They also urged President Barack Obama of the United States and United Nations Secretary General Banki Moon to put pressure on Jonathan to engage in fighting a more focused war on Boko Haram.

The open letter titled: “State of Operations In The North East As Observed By Some Concerned Officers,” stated thus:

“We the concerned officers participating in the North East Operation Zaman Lafiya do resolve to write this letter for the following reasons: a. to save our country Nigeria; b. to stop the bloodshed of innocent officers, soldiers and civilians in the North East; c. to appeal to the President of the United State[s] of America Mr. Barack Obama, United Nation Secretary General Mr. Banki Moon and other world leaders to as quickly as important intervene and urge President Goodluck Jonathan to do the needful in addressing the issue of insurgency in Nigeria especially in the North East.”
The officers who authored the letter said they were initially reluctant to air their grievances in the open in order not to boost the morale of insurgents, but added that troops fighting Boko Haram, a terrorist Islamist sect that has seized a significant swathe of territory in Nigeria’s northeast zone, have been equipped poorly. In addition, the officers accused Mr. Jonathan of condoning the looting of funds meant for the war against the insurgents. They specifically alleged that “Chief of Training and Operations, Major General J.A.H. Ewansiha” was a major looter of security funds. In addition, the letter stated that it was well known that Mr. Jonathan’s ADC had illicitly acquired stupendous wealth that has enabled him to buy up expensive homes in Nigeria and abroad.

The letter further alleged that top military officials had intimidated an officer who wrote a letter to the president to deny authorship of the document which exposed massive corruption in the anti-terror operations.

Below is the full text of the letter:
1. We the concerned officers participating in the North East Operation Zaman Lafiya do resolve to write this letter for the following reasons:

a. To save our country Nigeria.

b. To stop the bloodshed of innocent officers, soldiers and civilians in the North East.

c. To appeal to the president of the United State of America Mr. Barrack Obama, United Nation Secretary General Mr. Banki Moon and other world leaders to as quickly as important to intervene and urge President Goodluck Jonathan to do the needful in addressing the issue of insurgency in Nigeria especially in the North East.

2. As members of the Armed Forces of the Federal Republic of Nigeria, it is our responsibility to defend our country Nigeria which we are ever ready to do so as the call arises. But firstly, the civil authority has the first responsibility to equip us effectively to enable us to carry out such task. This is common practice all over the world. As professional officers and soldiers, we did not want to go public with details of our frustrations concerning this operation because doing so will boast the moral[e] of our enemy. But the persistent neglect of our plight made us to do otherwise.

3. It is well known fact that of recent, a commanding officer from this theater of operation wrote a letter to our President intimating him of a few out of numerous problems affecting us in this operation which we believe Mr. President will address. It appears Mr. President has chosen to ignore it because none of his relations are among us. In this 21st century, how can an accused [be] a judge of his own case? That letter clearly exposed the rot within the military authorities concerning this operation. This is because, the Army authority that was accused of poor administration in that letter, set up a kangaroo investigation that harass[ed], intimidate[d], and forced the officer to deny the authorship of the letter.

4. We authoritatively learned that, the Army authority succeeded in forcing the officer to deny the letter through the Provost Marshal (Army) who happen[ed] to be of the same tribe with the officer concern[ed]. For President Goodluck Jonathan to ignore such kind of allegation made us to believe the rumor going round that he has a hand or knowledge in the so-called Boko Haram. We are also aware of how the funds meant for these operations are being looted through the office of the Chief of Training and Operations, Major General J.A.H. Ewansiha. Despite our strong [belief] in democracy, we condemn a democratic government that condones corruption, especially in its military. The President is reported to always turn a blind eye to issues of corruption. For instance, the ADC to Mr.President is presently one of the richest officers in the army. He owns properties in choice places all over the country and even abroad. We are going to make public details of his wealth and assets at the appropriate time.

5. We are appealing to all well meaning Nigerians and leaders of International Community to please speak out with loud voice in [order] to make President Jonathan to constitute an independent high-powered committee to investigate the content of that letter written to him by the commanding officer. Should this request be ignored, the resultant consequence could only be imagined.

6. We stand bold to state that we are speaking the minds of all the officers and soldiers in Operation Zaman Lafiya.

– by Concerned Officers and Soldiers of Operation Zaman Lafiya

The 9 fastest ways to get guys attracted to you!