Natasha Belling suffers the worst Wardrobe malfunction Ever– An internet frenzy has emerged after a news host wore a green jacket with a penis- shaped neckline to present the news on Sunday, March 15, 2015.

39-year-old Natarsha Belling is an anchor for Network Ten in Australia who became the national presenter of the Ten Weekend News in 2007.

Ever since Ruben Haywood posted the picture on his Facebook Page, there has been over 25, 000 likes and hilarious comments by several internet users.

But the 39-year-old unwittingly caught the attention of the internet by wearing it, with the top attracting childish comments from gleeful observers.

One user wrote: “Well, that’s a ballsy thing to wear.”

Meanwhile, Belling is yet to say a word about the unfortunate wardrobe malfunction yet.

Below is the photo and just as one of the users rightly said, “Once you see it, you cannot unsee it,” so check it out: 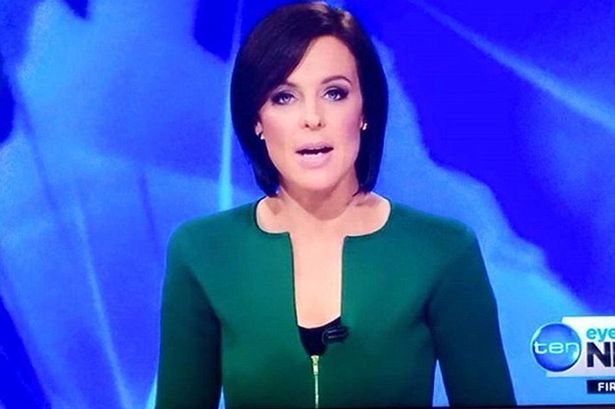 Guys, What do you think about Natasha’s penis-shaped Jacket??