Don Jazzy and D’Banj shock Wande Coal – You need to see what they did! (+Photo) 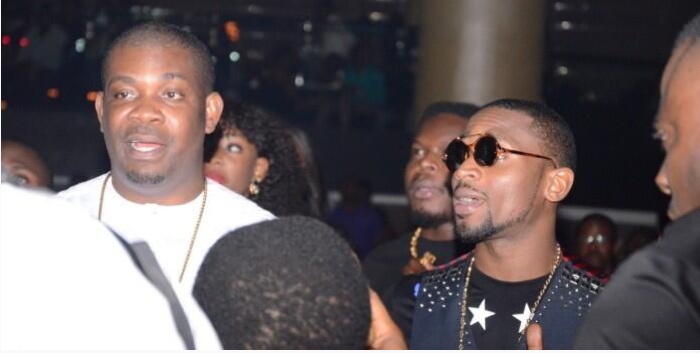 Don Jazzy and D’Banj shocks Wande Coal – After a long wait by his fans, Wande Coal is set to release his sophomore album, Wanted. D’banj and Wande Coal popularly known as Black Diamond were members of the now defunct Mo’hits records before the label split in 2012 after a rift between D’banj and Don Jazzy.

After the split Coal stayed back with Don Jazzy before leaving to start up his own label, Black Diamond label.
Many were surprised that Coal did not go with D’banj since it was D’banj that brought him to Mo’hits record.

But time they say heals things, the Koko Master took to his Instagram page to promote Coal’s sophomore album, Wanted.

SEE ALSO: The 7 beautiful and famous women D’Banj has slept with (With Pictures)

D’banj shared a photo of the album cover, captioning it: “Congrats to you bro @wandecoal on Ur new Album ,You have always been a Rare Breed #blackdiamond TOH badddd . You taught the New school and We all Proud of you . Voice of Life guys Pls go and Cop the Album he is #wanted OooSssHhhEee”

Don Jazzy too was not left out of celebrating his boy, he also took to his Instagram page to share Coal’s Wanted jacket.

Recently, Wande Coal released a music video, Ashimapeyin, off Wanted album, it also became an instant hit and then his feature on Patoranking’s My Woman, My Everything prepared fans for his return to the music scene.

10 Sure signs that it’s better for you to be friends than to be a couple – See this now!