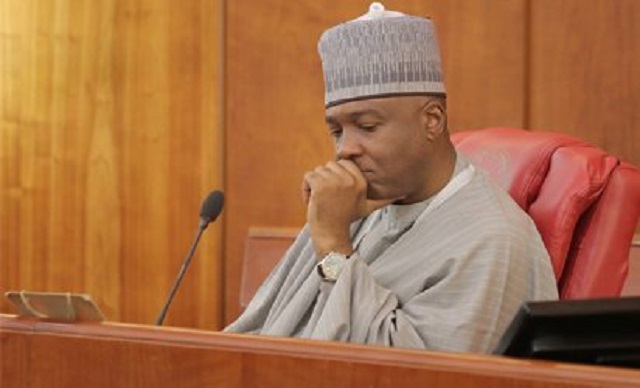 According to Leadership, the federal government gave an undertaking to the Supreme Court not to proceed with the criminal case against Senator Saraki, at the Code of Conduct Tribunal.

Mr Rotimi Jacob (SAN), counsel to the federal government gave the undertaking after the apex court agreed to suspend the trial.

Daily Post reports that a five-man panel of Justices of the Supreme Court ‎led by Justice John Fabiyi, in its ruling directed the Justice Danladi Umar-led tribunal to suspend the trial.

This is to enable the apex-court entertain and determine the substantive appeal that Saraki lodged before it.

In their ruling, the panel of Justices said: “It is imperative to state that all the parties, including the Code of Conduct Tribunal, should tarry a while to enable this court to determine the appeal before it.”

Justice Fabiyi said: “In effect, further proceeding at the CCT should be stayed pending the hearing of the appeal. Hearing date will be communicated to all the parties.”

Saraki is facing a 13-count corruption charges, filed by the Code of Conduct Bureau. He denies the allegation of false asset declaration and graft.

It would be recalled that the Federal High Court in Lagos had dismissed the Senate president’s appeal to stop his trial at the CCT.

Justice Ibrahim Baba, in his ruling, held that the court lacked the jurisdiction to hear the application.

#BBNaija: Laycon discloses the first thing he will do for his mum when he gets…

#BBNaija:What will happen if LAYCON doesn’t win tomorrow? From grass to…

10 celebrity bikini bodies before all that fame (With Pictures)

#BBNaija: Laycon discloses the first thing he will do for…