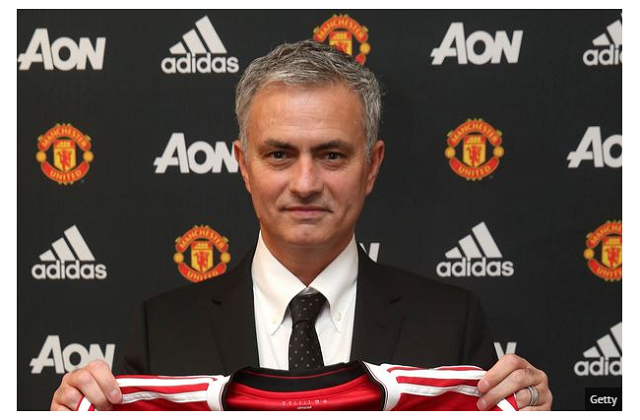 Mourinho vows to take “giant club” Manchester United back – The Portuguese was finally confirmed as Louis van Gaal’s replacement on Friday and insists he is ready for the challenge at Old Trafford. Jose Mourinho took charge of Manchester United and declared himself the right man to take them back to the top.

“It’s what I call a giant club – and giant clubs must be for the best managers. I think I’m ready for it,” said Mourinho, showing he has lost none of his self-belief despite being sacked by Chelsea.

Mourinho was confirmed as United boss on a three-year deal worth £45million and added: “I feel great and I think it comes at the right moment of my career.

“I’m happy, I’m proud, I’m honoured, I’m everything, but the reality is that what I love is to work and I cannot wait until July 7 to go out on to the pitch.”

The Portuguese was aggrieved he was overlooked for the United job when Sir Alex Ferguson retired in 2013. United went for David Moyes, who was sacked after 10 months, then Louis van Gaal, who was dismissed on Monday after two years. Speaking after he was confirmed as Van Gaal’s successor, Mourinho tried to airbrush the last three years from United’s history and said his only focus was to continue the legacy of success Fergie left behind.

“I think we can look at our club now in two perspectives,” he added. “One perspective is the past three years and the other is the club history.

“I prefer to forget the past three years, I prefer to focus on the giant club I have in my hands now and I think what the fans are expecting me to say is that I want to win.

“I want to win. And more than that I need the supporters and players to feel that I say that, it’s not just for the sake of saying it.

“I want to focus on the history of this giant club and give what I have and what I don’t have, so I will give absolutely everything to try to go into the direction we all want.

“I know what the fans can give me and I think also they know what I can give them.”

Mourinho, whose first signing as United boss is set to be Sweden striker Zlatan Ibrahimovic , said: “To become Manchester United manager is a special honour in the game. It is a club known and admired throughout the world. There is a mystique and a romance about it which no other club can match.”

And executive vice-chairman Ed Woodward said: “Jose is quite simply the best manager in the game today.”

Mourinho’s first task will be to resolve the future of Ryan Giggs, who was Van Gaal’s assistant.

He will appoint long-time colleague Rui Faria as his No.2 at United, meaning any role for the Old Trafford legend would be a demotion.

Giggs, currently on holiday in Duabi, will hold talks with Mourinho, which is one of the reasons why United held off from announcing the new backroom team.

Mourinho’s first task will be to resolve the future of Ryan Giggs, who was Van Gaal’s assistant.

He will appoint long-time colleague Rui Faria as his No.2 at United, meaning any role for the Old Trafford legend would be a demotion.

Giggs, currently on holiday in Duabi, will hold talks with Mourinho, which is one of the reasons why United held off from announcing the new backroom team.

Former United midfielder Giggs is unhappy at being overlooked for the manager’s role, with a tacit succession plan in place for him to take over when Van Gaal’s contract ended next summer.

But the decision to ditch Van Gaal a year early and appoint Mourinho has left Giggs in limbo and facing the end of his glittering 29-year association with United.

Mourinho is understood to want to retain Giggs, as a valuable link to the United way, but knows he may not be able to persuade him to stay and accept a lesser role.