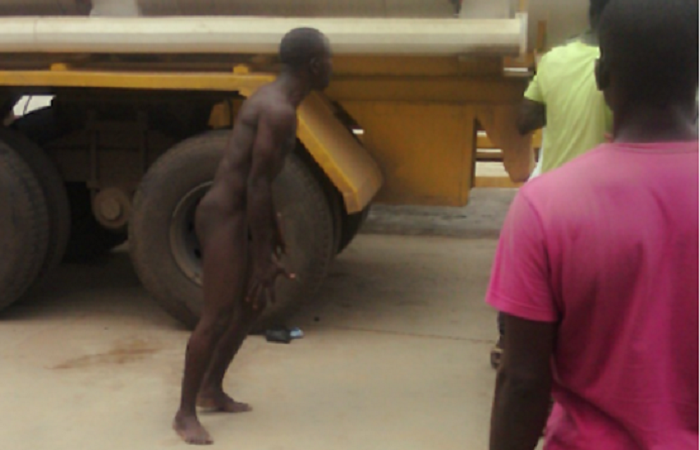 Man strips completely naked to win N10,000 bet – An unidentified man caught the attention of people in Kabayi, Mararaba, near Abuja yesterday, September 7 – The man stripped naked in broad day light to win a bet of N10,000 he placed with his friends – The man was said to have taken the decision to prove to his friends that he could do anything for money

Good Samaritan killed while trying to rescue man from the…

An unidentified man, believed to be in his 30s, yesterday, September 7 stripped naked in broad day light and walked about freely at Kabayi, Mararaba, near Abuja.

The man was said to have placed a bet of N10,000 with his friends to prove to them that he could do anything for money.

A witness said that the man surprised his friends, pulled off his clothes and walked on the streets naked while people trooped out to watch him.

A witness, who spoke on the condition of anonymity, told Daily Trust: “I couldn’t believe it but it is real. I saw people running to have a glimpse while others, maybe scared, stayed away.”

The witness, however, said suggested the man was probably insane while some residents who spoke on the issue said he may have been influenced by drugs.

The report stated that after the parade, the man was immediately paid the agreed sum of N10,000 by his friends.

Meanwhile, recently a  pastor, Chukwuemeka Okoro, and his wife, Esther, were arraigned in a Mararaba Upper Area Court because a missing goat that was found in their house.

The couple were arraigned for allegedly intimidating one Joseph, their neighbour who owns the goat on a three-count of intimidation, mischief and intentional insult contrary to sections 397, 327 and 399 of the penal code.