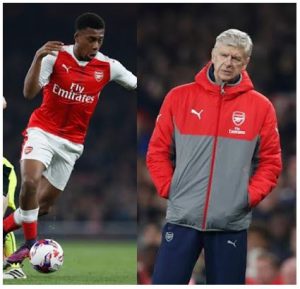 Arsenal manager Arsene Wenger has revealed that Nigerian starlet Alex Iwobi can prosper as a playmaker following his display in Arsenal’s 2-0 English League cup win over Reading FC on Tuesday. Arsenal boss Wenger said to journalists during a press conference :

“Yes, he can play in a central role. You see that he is not a typical winger. I think he can play in that role. He turns the game forward, he passes the ball through the lines very well, he has a final ball in him.”

“I think he has all in the locker to pass and give the final ball – what you want from him now is the finishing, and that’s still a little part that is missing in his game. He is too nervous at the moment when he has the possibility to finish.”

At 14, I was told by Arsenal that I wasn’t good enough – Alex Iwobi Reveals