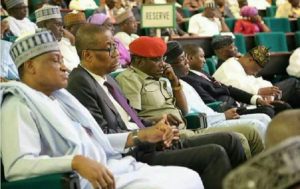 Ministers who were sleeping – This is quite disturbing! Five of the ministers in the cabinet of President Muhammadu Buhari were caught sleeping while the president presented the 2017 budget. This was brought to the attention of the press by the twitter handle known as @NGRWailers, belonging to the group, who call themselves ‘The Nigerian Wailers’ and who constantly criticize Buhari’s government.

Are you wondering why Nigeria is doing Ziggy Zagga. Here are Buhari's ministers sleeping during Budget presentation at the @NGRSenate. pic.twitter.com/W4uPKzl79T

From the tweet and the accompanying picture, the ministers who were asleep are:

Solmon Dalung is the minister for youth and sports, who has been in the news lately for some comments which many have called insensitive.

Outrage has trailed the statement credited to him, that the failure to pay the Super Falcons who recently won the just-concluded CAF African Women Cup of Nations in Cameroon was because the federal government did not expect the team to win the competition.