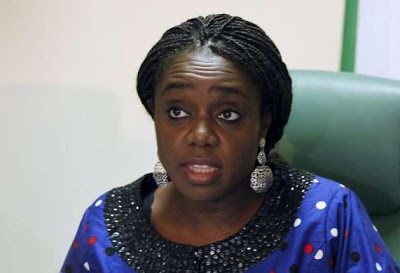 Minister of Finance, Kemi Adeosun, has asked the National Assembly to reduce the powers of the governor of the Central Bank of Nigeria (CBN). Adeosun made the call when she received members of the House of Representatives Tactical Committee on Recession led by Bode Ayorinde in her office yesterday March 21st.

According to Adeosun, the enormous powers given to CBN governors have resulted in the some of the financial crisis witnessed over time. She added that the excessive powers have caused some of the CBN governors in time past to act on financial matters without recourse to the minister of finance, who according to her is constitutionally required to supervise financial policies, programmes and activities of the Federal Government.

“I want to correct the impression that the CBN is under us. They are not. Unfortunately, a law was passed, making them independent and giving them more powers. This has resulted in one person having so much power. In the time of Prof. Charles Soludo as CBN governor, he went to the National Assembly asking for more powers and you can see where that has taken us to. So we are back to the legislature to help us correct this problem of too much power. As a result, there are no checks and balances” she said.