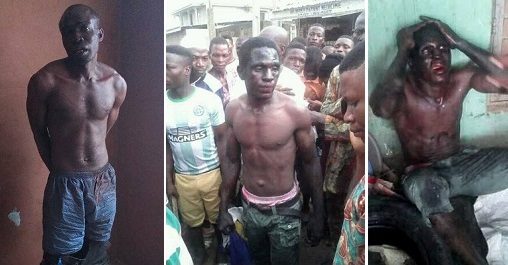 Facts emerged at the weekend as to why end may not be in sight to the menace of Badoo cult group in Ikorodu area of Lagos State.The group, according to a top security source, sells the handkerchief, which the terror group use to clean the blood of their victims, for a whooping N500,000 to some highly placed Nigerians. “We heard they sell one handkerchief containing the blood of their victims for N500,000 to highly placed Nigerians. The police must urgently investigate this lead in order to put an end to this menace, so that residents can sleep with two eyes closed in Ikorodu.”

The police, which is now investigating the veracity of that information, engaged in joint operations with the Rapid Response Squad (RRS), Department of State Services (DSS), Lagos State Task Force, the Oodua People’s Congress (OPC) and local vigilance groups to raid the dreaded group’s black spots at Igbobo/Bayeku, Ibeshe, Ijede and Imota at the weekend.

This came few days after a closed-door emergency stakeholders meeting was held between officials of the Lagos State police command and National Leader of the OPC, Otunba Gani Adams, with leaders of other vigilance groups over the security challenge in Ikorodu.

The operation was led by the Deputy Commissioner of Police, in charge of Operations, Edgal Imohinmi, with over 100 suspected members of the cult group arrested during the raid.

There was a brief meeting with the security agencies and local vigilance groups at Ipakodo division before the raid took off from Ibeshe, where majority of the suspects were arrested.

An OPC member, Mr. Abiodun Akerejola, a.k.a. Ojolebua, who spoke to crime reporters, said the raid was a welcome development.

“The issue of Badoo and other cult activities in Ikorodu and environs should give everyone some concern and not only the police. We do not know the next family or person they may attacked,” Akerejola said.

Mr. Balogun Moses, a resident in one of the communities, said:

“If the raid is maintained on a regular basis, crime rate would be drastically reduced. We commend the effort of all the security agencies and local vigilance groups, who know the terrain. Everyone can have some respite now. For the past eight months, Ikorodu was on the news daily for negative stories.”

The suspects were caught around 2a.m. in an SUV and were flagged down by residents who were doing stop and search around Odogunyan junction. It was gathered that a big stone, diesel and a cutlass were found in the vehicle.

The suspects reportedly could not offer any explanation as to what they used the objects for and where they were heading. They were subsequently beaten up and burnt to death together with the vehicle.

The PPRO confirmed that over 100 Badoo suspects had been arrested across Ikorodu, adding that investigations were ongoing to screen out innocent persons among them.

He said: “We can confirm the arrest of 100 suspected members of the dreaded cult group, and they are helping with ongoing investigation into the activities of the gang. Government is on top of the situation and we like to use this medium to caution the people to desist from jungle justice.

“We also like to assure residents that they are free to go about their normal activities without let or hindrance, as the police and other security agencies in the state are poised to make Lagos uncomfortable and hot for criminal elements to perpetrate their nefarious activities.”

Also, it was reported that in another incident, a heroic dog prevented suspected Badoo members from carrying out an attack in Ikorodu yesterday.

According to a resident of the area, who shared the story on his social media page and posted images of a wounded dog, he wrote:

“In spite of the recent raids, let’s be vigilant. Badoo deadly group are still at work. Around 1a.m. on Sunday, they wanted to enter a house in my area at Ojogbe, but their dog stopped them by barking loudly.

“In frustration, they stabbed the dog. Am not sure the dog is going to survive the stabbing because it has been bleeding seriously all day. May God continue to guide and protect us. At this stage, it is only God that can help us in Ikorodu.”

Despite the declaration of traditional rituals by Ikorodu chiefs and traditionalists on Friday to halt the activities of the killer gang, they stormed the Jumofak area of Igbo-Oluwo in Ikorodu around 1a.m.

This time, the gang of three ran out of luck as local vigilance team arrived the scene as they were trying to break into one apartment near a gas station in the area.

The vigilance team, however, apprehended one of the suspects while the other two took to their heels.

Eyewitnesses’ account said the trio were naked and rubbed their bodies with engine oil but it could not be ascertained if they were in possession of objects like hammers, white handkerchiefs and grinding stones that the gang was noted for.

Picture of the two other guys burnt to death alongside Chinedu Paul in Ikorodu, after they were mistaken to be badoo members

Badoo crisis: What effect could it have on Olamide badoo’s image?

MUST READ: Open letter to everyone who lives around Ikorodu or might be visiting Ikorodu soon