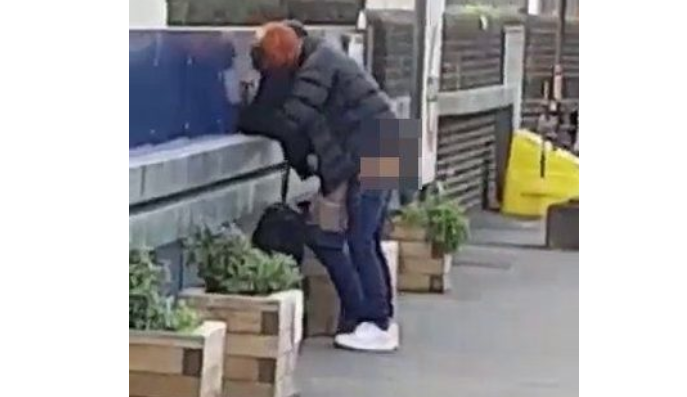 A video has shown the moment a couple was caught having s*x on a Tube station platform in broad daylight. According to Metro UK, the pair were spotted at Hackney Downs Overground station in east London on Saturday. Police are now investigating the footage, which was shared thousands of times online after being filmed at around 7am. The couple were locked in the sexual encounter for several minutes. When the train finally arrives, both man and woman pull their trousers up and get on the Tube as if nothing happened.

A twitter user filmed the video and then posted it with the caption: ‘Hackney Downs is a different place uno… How’s a man clarting this ting at a train station.’

In the footage, he says: ‘Would you believe it, two people were just shagging the place down on the platform, you know what I mean.

Couple arrested for inserting a bottle into his…

‘What time is it now… 7.16am. They’re at it like rabbits, then they jump on the train afterwards.

‘It’s early in the morning on the platform at Hackney Downs. I’m not joking man. Today’s Saturday the 26th. And they shagged the place down. Crazy.’

It has since been retweeted more than 2,000 times – and has attracted quite a response.

One wrote: ‘Broad daylight and not a single damn given. These people have no shame. The way they boarded the train like nothing happened too!’

Another added: ‘True gent. Romance is alive and well.’

And another said: ‘She aint letting that handbag go is she.’

A British Transport Police spokesman said: ‘We are investigating reports of a couple engaging in sexual activity on a platform at Hackney Downs station.

Vera Sidika advices ladies on how to spice up their relationships