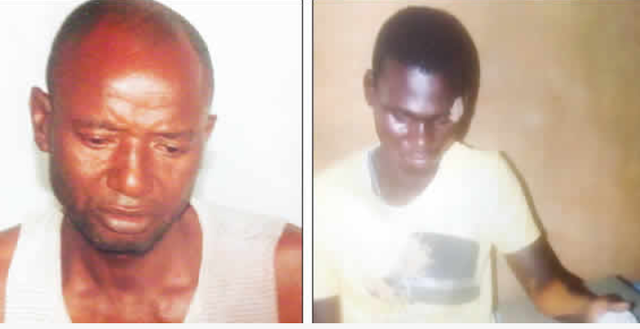 Two workers of a Chinese firm, WEMPCO, Magboro, Ogun State, have accused the company of not compensating them after factory accidents which led to permanent disability. The workers, Augustine Okolocha and Goddey Lucky, said they were both working in the nail unit of the factory when their fingers were chopped off by the machines at different times, adding that the management left them to their fate. While 57-year-old Okolocha said he lost two fingers in February 2017, Lucky said he lost three fingers since April 2014.

Okolocha, an indigene of Ukwachi, in the Ndokwa East Local Government Area of Delta State, said he was producing plates of iron when the machine cut off his fingers. The father of four, who worked with the company for more than five years, said he was taken to the gate on a forklift before the manager called an ambulance to take him to a hospital in the area.

After spending about a month at the hospital, he said he resumed his duties and was posted to the security unit due to his condition.

“Every worker has a card with a lifespan of two weeks. The card is marked by our boss, Master Fu, and we get paid based on the number of days we work out of the two weeks in the card. On a daily basis, I was getting paid N1,027.
“When I was discharged and returned to the company, I was posted on night duties to the security post. I worked three days in a week. I resumed 7pm and closed 7am.
“There was a time we had a two day public holiday and I was paid N5,000,” he added.

Okolocha said despite the low pay and his condition, his boss  complained that he was cheating the company.

Okolocha berated the company for the treatment meted out to him and accused the Chinese managers of hiding safety equipment from workers.

“Before now, anytime I am off duty, I would go out for part-time jobs and make money; but now, I am useless and cannot do anything. I want Nigerians to save our youths. There are youths in the company working despite losing their legs and hands. I want my compensation,” he said.

Twenty-five-year-old Lucky, who is an indigene of Sapele, Delta State, said he had barely spent a year in the company when he lost three fingers.

He said although the incident happened since April 8, 2014, the company had not compensated him for his disability.

He said, “I was working on  a machine when my hand was drawn in and by the time I forcefully removed it, three fingers had been lost. I was taken to a hospital where I was treated.
“After my discharge, the company paid me N6,000 every two weeks. But I have told them that I don’t want the payment anymore because it is too small. I have asked them to give me a payoff, but they are saying the insurance company would pay but there was delay with some signings. How long will I wait? It is over three years and nothing is happening.”

The manager of the company, identified only as Gani, said WEMPCO was making efforts to compensate the victims.

“There is nobody that has an injury that is abandoned in the company. If you have been treated and discharged from the hospital, can you say you were abandoned? And meanwhile, we would have reported the accident to the insurance company. The only issue is that getting insurance claims could take time.

“Okolocha has his part of the blame. He had resumed and worked for two months when he suddenly wanted to be allowed to stay back at home and be getting paid while doing nothing. Is it that easy? If the request was before resumption, it would have been a different thing.
“He didn’t inform me or anybody when he abandoned his duty and went away. It was when he didn’t receive payment for two weeks that he came to complain to me that his card was not signed. I told him that he had resumed work and was posted to security unit for ease. After he was redeployed and he told me, I pleaded with the boss to allow him to remain in the security unit because  of his condition and the man agreed. But he just decided to go away.
“Most workers are ignorant of certain things. When accidents like these happen, they expect to be paid huge sums of money immediately, not knowing that everything has procedures.”

He promised to go to the company’s head office in Lagos over the insurance claims of the workers.