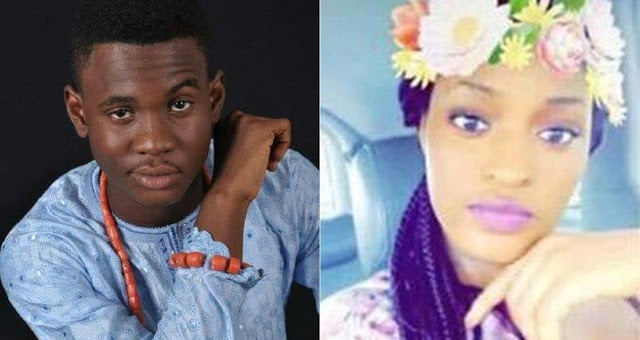 News broke yesterday that a 3-00 Caleb University student, Morrison Akinbule, was allegedly Murdered by his baby mama identified as Chidinma. The said Chidinma has now been arrested by the State Criminal Investigation and Intelligence Department Yaba for the murder of Morrison. It was gathered that the boy started their relationship 3-years ago and have a child together but are yet to tie the knot. The sad incident on Saturday night after Chidnma visited the deceased’s mother’s Gbagada home to pass the night. They got into a fight which resulted in Chidnma hit Morrison on the head leading to his death.

The deceased’s elder sister who spoke with Punch Metro on the telephone on Wednesday, said Chidinma had yet to disclose what caused the argument which led to her brother’s death. The sister, who did not give her name, said the family was being cautious in discussing the incident with “strangers” for security reasons. She said, “The lady has been arrested and she is in Panti (SCIID). The incident happened in our mother’s house, not on the (Caleb University) campus. She came around to visit him. We have not ascertained what led to the argument. We have been trying to find out, but she is not saying the truth.

“They had been together for about three years and they have a kid. She is a babymama. The boy is one year and six months old. That was the major thing that bound them together. “We are ready to follow the case to a logical conclusion. We have been asking her what led to his death because there is no injury on his body.”

The sister, however, declined replies to further inquiries made by PUNCH Metro on the matter, saying “this is a critical period for us and we are being very careful. That is all I can tell you for now (she cuts the call).” One Mia Seren, who claimed to be Akinbule’s neighbour, revealed what happened saying a piece of cloth was tied to the deceased’s neck when he was brought out from the apartment. Seren said he was rushed to a hospital, where he was confirmed dead by doctors on arrival.

“He went for a party; came back around 9pm. Chidinma was not home, so he called her to ask her where she was. They planned to meet at one place. When they came back, they were with fast foods and they went to their room.

“About 30 minutes later, we heard them fighting in the room and somebody was hitting someone’s head on the wall. Chidinma did not open the door. Later we did not hear their voices.

“About 30 minutes later, she opened the door and Morrison (Akinbule) was seen on the floor.

“He was unconscious and he had an injury on his head, and had a cloth tied to his neck. We rushed him to a hospital; then they (doctors) said he was gone,” the post read in part.