Legendary actor, Olu Jacobs clears the air on the rumor that He snatched his wife from her former lover 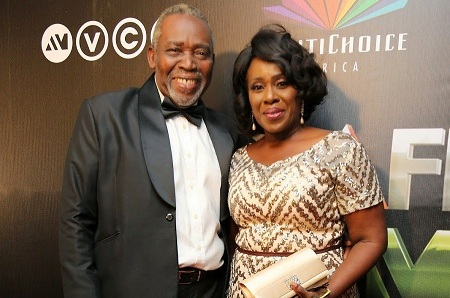 Veteran Nollywood actress Olu Jacobs in a recent chat with The Entertainer narrates how he met his wife about 40 years ago. He also talks briefly on their successful marriage.

A while ago, Fela on Broadway hit Nigeria and made waves but Americans did the telling of the story? Today, thanks to Bolanle Austin-Peters, this is a Nigerian production. Do you think we can sell this to the world?

You wait and see. I am waiting too. I believe we are all going to be wowed! I mean, so pleasantly surprised. Don’t you know the songs and the actors? They will surprise us.

Sir, stage plays are on the rise now. In fact, before we never had stage plays week in week out at a venue, apart from The Muson Centre and National Theatre…

Do we have any good theatre venue? No, not at all. Now, people are making effort because the demand is encouraging and they are responding to it. This is only the beginning and we are entering a change; this is the time for change and we are getting it right.

You have done over four decades as an actor. When you look back, what would you say are your happiest moments?

Looking around me and seeing that many people are there to come and enjoy themselves in an area that people thought would never be possible, because in the past, actors and actresses were looked down on. Now they are doing well and people are applauding. That is my joy. Like I say, I would rather one person praise my work than have 99 do the opposite. Even if I have my work praised by 99 people but one comes and says sorry, I don’t understand it, it ruins everything. This is only the beginning. The schools are going back to play their traditional roles and acting and drama are all part of the curriculum; that was how we grew up.

You were in Oloibiri, a fantastic movie. Yes, it won awards but what do you think made the movie stand out?

Good work. You look at the lighting, it captures the mood and the sound was good. What more do you want? And the story is compelling. You are shocked and your thinking will never be the same again. The story was being told to people who knew about it and some who did not know about it, but the message was passed. The movie is like a reawakening, to make sure we don’t let this happen again.

Prev post1 of 2Next
Use your ← → (arrow) keys to browse
Tags: joke silvaolu jacobs
Share12Tweet8Pin3SendShare

‘We still do the do’, Joke Silva speaks on Olu Jacobs